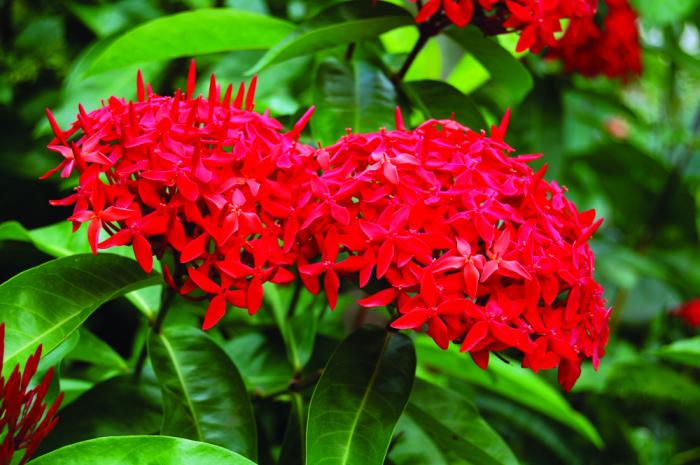 PHUKET: Of All the tropical plants beginning with the letter “I”, the ixora (khem in Thai) is probably the most ubiquitous. Yet another shrub with Indian origins, there are few cared-for public spaces in Phuket that do not have a bed or border of orange or dwarf pink and white ixoras.

Small specimens are invariably available in plant nurseries, growing happily in small plastic pouches – testimony to its toughness, its adaptability to various soils (though it prefers an acidic one) and its willingness to be propagated from cuttings. It is one of the least expensive plants around.

Indeed, for most people arriving in Southeast Asia for the first time, the ixora will probably be the first tropical plant they encounter, at an airport or flanking an avenue nearby. Why? Because ixoras – and the name is taken from an Indian deity – are not only extremely durable, and not only bloom throughout the year, but can be pruned drastically to create neat, bonsai-like shapes.

Right now, the orange ixora coccinea is flowering everywhere, apparently impervious to the protracted spell of dry weather we have been experiencing. A true tropical, it loves the sun and its small evergreen leathery leaves seem impervious to its hot caresses.

While I. coccinea will settle happily in a container, it is a compact shrub and the larger I. javanica,or chinensis, which have handsome light green foliage and clusters of orange, red, yellow or white blooms, are a more suitable choice for pots. Better to keep I. coccinea with its tiny, dark leaves for your borders, or use it to create a neat, low hedge.

In my Chalong garden, I had yet another variety I. finlayson, which grew to a height of about two meters and became a prominent feature with its large, fragrant, pure-white flowers. A good choice as a specimen shrub. All species – and there are some 500 – are low-maintenance, and so long as the temperature does not drop below 18C (64F), they will thrive. Hardly a problem in Phuket… It is a shrub I would not be without.

Another plant often seen in public parks and along roadsides is the inthanin, also known as the Pride of India. Another Indian connection. But there the similarities end. For the inthanin is a substantial tree, up to 10 meters tall when mature. And in order to include it under “I” , I am cheating by using the Thai name by which my partner invariably refers to it. Its botanical moniker is lagerstroemia speciosa and it belongs to the family of crape myrtles (others include floribunda, loudonii and macrocarpa).

In common with all its kind, the inthanin or queen crape myrtle is not only showy and decorative, but is hardy enough to be employed as a wayside tree, especially in South Thailand. It used to be a sight for sore eyes along the airport road, but has long since been replaced by characterless sugar palms.

Lagerstroemia speciosa has gray, sometimes almost white bark and the wood is used in construction. But its glory resides in its array of deep pink panicles of crinkly rosy-pink flowers. Crinkly? That’s why the genus is referred to as the crape (or crepe) myrtle. That these floral clusters are produced all year round is an additional bonus. A multiple trunked tree, it is ideal for a tropical garden where you have plenty of room, especially as an ornamental specimen. For it is sun-loving and will grow vigorously in most soils.

Like the ixora, it is in full bloom right now. Available in nurseries, only the seed-grown species is normally for sale. But there should not be a problem with that. Any shortcomings? It’s a deciduous tree, so expect some falling leaves from November onwards. A small price to pay.

Tip of the Week:

It is worth knowing if a tree or large shrub will drop its leaves, as this characteristic may be an important consideration when planning a garden or buying a new plant. A tree is classed as deciduous even if it drops its leaves for only a brief period.

Thus, the flame tree (delonix regia), currently in flower, has already released half of its foliage before the orange blooms appear. Interestingly, it will keep most of these flowers and its new foliage well into the rainy season, but it is still classified as deciduous.

Evergreen trees are generally lower-maintenance, since their foliage is usually tougher, and what few leaves they shed rarely litter the ground. However, deciduous ones, especially those with an open habit, are more serviceable in flower beds since they provide dappled shade. Evergreens with dense foliage can make life difficult for understorey plants by blotting out too much light.

If you have a question or a garden that you would like featured, you can email me at: drpaccampbell@gmail.com. Further information about this gardening series and Patrick’s other work can be accessed at:patrickaccampbell.wordpress.com

Dog of the Week: Chill