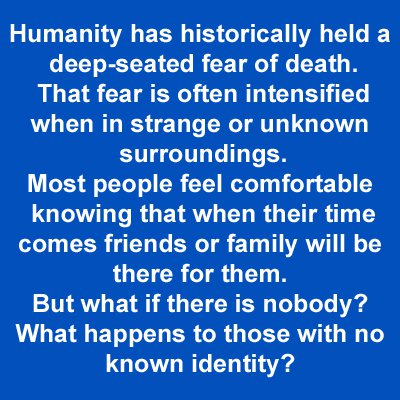 PHUKET: The unidentified body of a Caucasian male, recovered from the sea south of Phuket at the beginning of November, was finally laid to rest on December 14.

The red-haired foreigner, dressed only in a black singlet and gray shorts, was discovered by the crew of Thai fishing boat Sor Naja as it sailed between Racha Yai Island and Koh Hei.

Chalong Police together with Phuket Ruamjai Foundation rescue workers rendezvoused with the Sor Naja to recover the body from the sea. At the time, rescue workers estimated that the man might have been about 45 years old. Showing no obvious signs of injury, they speculated that he probably drowned.

Once on dry land, “Red Hair” was transferred to the morgue at Vachira Phuket Hospital. Meanwhile, police started the often-difficult task of ascertaining his identify, the first step toward contacting relatives who might then arrive and claim the body.

In this case, putting a name to the deceased was difficult from the start as the corpse was found without any identification whatsoever. A review of missing persons reports turned up nothing, and after a month and a half in the mortuary it was determined that all lines of inquiry were exhausted. At this point, case officer Nitikorn Rawang of the Chalong Police authorized the release of the body to Phuket Kusoldharm Foundation workers for burial.

With no known relatives or next of kin to prepare Red Hair for his final journey, Kusoldharm Foundation staff performed a small funeral ceremony before interring his remains at Mai Khao Cemetery.

Religious beliefs aside, for many of us there is an underlying fear of what will happen to our mortal remains after we pass away. Are they to lie undiscovered until the smell of decay alerts a neighbor? And when finally discovered, will every passerby stop and gawk as the body is stripped and placed in a black rubber bag. Many people wonder if their remains will be treated with respect.

Fortunately, the vast majority of visitors and residents to Phuket are known to others who can help identify them.

The death of a tourist can turn a nice holiday into a sad task indeed for a fellow traveler or family member who has to make final arrangements.

In the case of an expat, it is most often the local community that steps in to help, with individuals and sometimes entire groups often going far beyond the call of duty to provide their loved one with a fitting send-off. Even a lone tourist, if identified, usually has the services of an honorary consul to offer advice to relatives concerning repatriation of the body.

But what of Red Hair and other “unknowns” who die in Phuket? How are their remains dealt with? In almost every case they will ultimately find their way to the Vachira Phuket Hospital morgue.

The Vachira morgue can store up to14 bodies at any one time. The bodies of Thai nationals are kept for a week. More often than not, relatives will claim the body within that time. With the bodies of foreign nationals, the holding period may be up to one month.

Although not equipped to conduct full autopsies, Vachira staff will conduct a post-mortem examination if requested by police. Often this also involves taking DNA samples to assist in the identification process. In cases where the police require a full autopsy to be carried out, the bodies are sent to Police Region 8 Headquarters in Surat Thani.

If a patient has died in hospital, relatives are usually easy to contact and hospital staff can complete this on their own. Unidentified bodies can be problematic, however. The issue faced by hospital authorities on how to dispose of such remains is a matter of primacy.

In circumstances where bodies have been brought in by law enforcement officers, the police have the responsibility for contacting relatives, or, in the case of foreigners, the relevant diplomatic mission. Bodies, even if they were patients, are considered “unclaimed” if no relatives can be found.

Vachira Hospital keeps a close eye on the number of unidentified bodies in storage at the mortuary. Once they have several bodies coming to the end of the typical holding period, staff contact the Kusoldharm Foundation to arrange for collection and burial. This is not only for unidentified bodies, but also those that relatives have decided, for whatever reason, to leave with the hospital.

So what happens when the hospital and police decide the time has come for the body to be disposed of? The Kusoldharm Foundation doesn’t maintain a fixed collection schedule, but they will respond to requests from any island hospital. The bodies that the Kusoldharm claim are taken to the Mai Khao Cemetery, near the Phuket Tsunami Wall of Remembrance, for burial.

All the graves are clearly numbered so the bodies can later be identified if a relative comes forward to claim one.

Kusoldharm workers place the coffins in proper graves to prevent them being disturbed by wild animals or the elements. The graves are laid out in lines, each numbered to identify the body should anyone come forward at a later date to claim a relative. It is a duty that the Kusoldharm workers perform with dignity and respect.

“We have a small ceremony during which we follow the Chinese rituals and burn silver and gold paper at the grave site,” Kusoldharm worker Kritsada Suwannaroj told the Phuket Gazette.

“In my two years of experience, I have never seen anyone come to claim a buried body. Although once, relatives did come to see us. We were about to exhume the body, but they didn’t think they could bear to see it. So we left it in situ and the relatives had a ceremony there at the grave,” said Mr Kritsada.

Eventually the graveyard will fill to capacity. When a thousand unclaimed bodies have amassed, the Kusoldharm will exhume them en masse and hold a ceremony before cremating all of the remains, as it has done at other graveyards many times before. After that, new corpses will be buried in the now-vacant graveyard, starting with grave site number one.

So Red Hair will be remembered, even if who he was, where he came from or how he died is never known. So Rest in Peace, Red Hair.