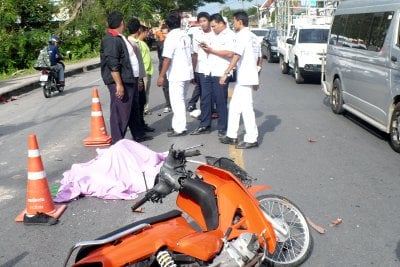 PHUKET: A student from Phuket Technical College is dead and one of his classmates is injured after the motorbike they were riding on collided with a six-wheeled truck this morning.

Capt Somchai Nuboon of Phuket City Police rushed to the accident scene, near the Rassada Municipality offices on Rassadanusorn Road, after receiving a report at 8:20am.

Already at the scene were a Kulsondharm foundation emergency-response team and traffic police, directing the rush-hour tailback around the debris.

His classmate, Chokchai Choorart, also 17, was rushed to Vachira Phuket Hospital for treatment.

“The driver of the truck, Uthai Phanpon, 51, was waiting at the scene,” Capt Somchai said.

“From our initial investigation, we believe the motorbike was out of control because there is a long scratch along the side of the truck,” he added.

Mr Uthai told the Phuket Gazette, “I was driving toward the [Phuket] Rajabhat University intersection [called the “Wor Kor Intersection”] to deliver goods to shops. I was not speeding.

“The motorbike seemed out of control, coming head-on, and collided with my truck. I couldn’t avoid it,” he said.

One of Sathaporn’s friends told the Gazette that the students were riding in a group on their way to see other friends in the neighborhood.

“Sathaporn was riding the last motorbike in the group. I didn’t see what happened. I heard a crash behind me. I looked back and saw Sathaporn and Chokchai on the ground and the truck had stopped,” he said.

“We didn’t have any classes today. We had to do a test online via the internet, but we hadn’t done it yet. We wanted to see our friends first.

“We were not speeding and we were on the correct side of the road,” the boy added.

Capt Somchai told the Gazette that police were continuing their investigation into the accident.

The death of Sathaporn came just two days after a woman and her seven-month-old unborn child were killed when they were run over by a truck in Patong.