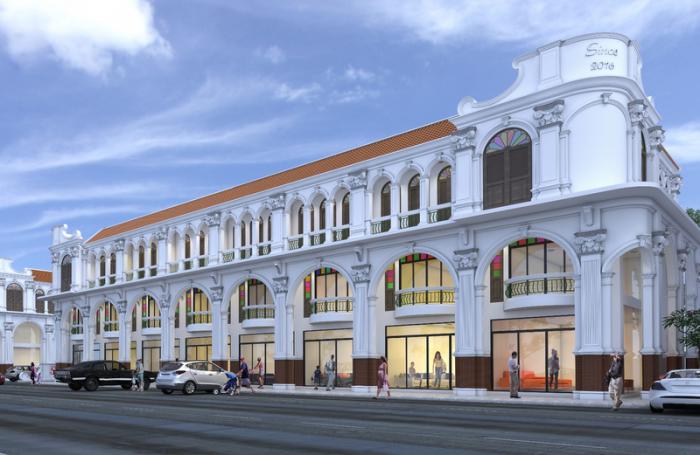 PHUKET: Local developer Supicha Property is set to begin construction of a mixed-use commercial and residential development near the British International School (BIS) in Koh Kaew in December.

The construction company has sunk 300 million baht into the Supicha Sino Koh Kaew project, situated on eight rai opposite the international school in Koh Kaew and backing on to a lake.

Fronting the development along the roadside are the 22 Twin House units, each with a total floor area of 160 square meters – the smallest units in the development – priced at just under 4 million baht.

Clustered in the center of the project are the 32 Home Office units, each covering an area of 165sqm, divided into rows similar to backstreets in a town center and priced at just under 4.5 million baht.

The more exclusive two-storey single family houses each has a total area of 175sqm and backs on to the lake. These have a price tag closer to the 5 million baht mark.

“We are confident the Phuket Town style concept will be a hit with local buyers, especially given the location near the international school but at reasonable prices,” said the project’s sales manager Hathaitip Koysomwong.

“Construction is set to begin in December and is expected to be completed around the first quarter of 2018,” said Ms Hathaitip.

The properties are aimed at mainly Thai buyers, said Supicha Property Managing Director Supicha Yorsaengrat – also the managing director of Isayaporn Co Ltd, which was established in 2010 and owns the land on which the project is to be built.

“Demand is high for these kinds of units. The price and mixed commercial-residential concept are suitable for local investors. We have already sold 13 units,” she said.

By The Book: The British love affair with Phuket