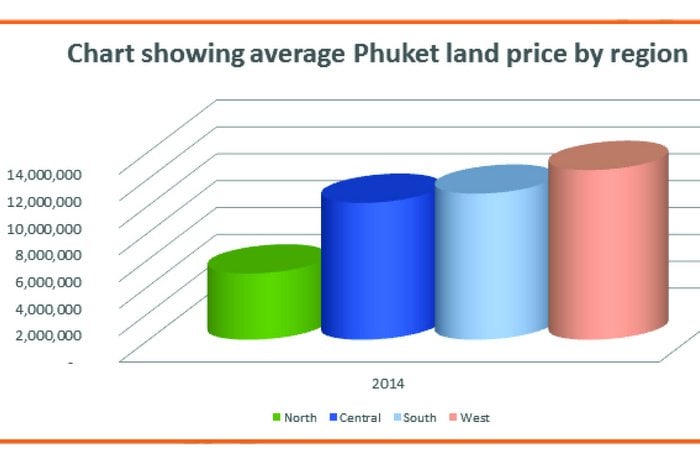 PHUKET: If one single fact has become evident in Siam Real Estate’s Residential Market Report 2014, it is that since the tragic tsunami on Boxing Day 2004, land prices in Phuket have tripled in value.

The surge in prices has been led by land prices on the west coast, most notably in

the traditional and well-established tourist destinations of Patong, Kata, Bang Tao, Laguna and Surin. However, land prices in southern and central Phuket have also bloomed, and now average more than 10 million baht per rai.

What is clearly noticeable is that land prices in the north of Phuket have lagged compared with these in all other locations on the island. To many Phuket residents this may seem obvious, as for years the north of Phuket lacked the necessary infrastructure and tourist appeal for land-price increases to match the rest of the island.

This is all about to change.

In comparison, the north saw little in the way of new developments in recent years and today remains the least-developed location on the island.

However, we are seeing a growing trend of improving infrastructure in the north of Phuket, which will lead to a growing demand for more residential property development in the area.

The north is already home to two deep-water marinas, at Ao Por and Yacht Haven; the Phuket International Academy and school, which boasts some of the highest education standards and best sports facilities in Thailand; not to mention Phuket International Airport and Phuket Airpark; plus three golf courses, Blue Canyon (two 18-hole courses) and Mission Hills.

Tesco Lotus now has a new superstore in Thalang, and Homepro and Makro have recently opened their latest stores neighboring Tesco.

Phuket’s northern area provides easy access to some of the island’s best beaches: Nai Yang, Mai Khao, Nai Thon and Layan, which offer long stretches of white sand along the Andaman Sea and are almost deserted in comparison to the beaches of Patong, Kata and Karon.

This year will see the completion of the 5.8-billion-baht expansion of Phuket International Airport, to which the northern areas of Phuket provide fast and hassle-free access. This is ideal for the increasing number of Phuket residents who use the island as a base and commute for business throughout the region.

Despite these improvements in the local infrastructure, land prices in the north still remain reasonable. We are now seeing a growing trend of individual buyers looking to build large residential homes taking advantage of these lower land prices.

Longer-term land investors have also been attracted to cheaper land prices in the north, plus the great opportunities to buy reasonably priced land with potential to increase in value (click here to see ‘heat map’).

Yet, the clock is ticking. We expect to see increasing land prices in the north as demand increases from property developers and individual buyers looking to take advantage of the lower land prices in an area.

Other trends in land prices to note are a growing trend on Phuket’s west coast of new residential property developments moving more inland to locations such Cherng Talay and Layan and further north to Nai Thon, Mai Khao and Nai Yang.

This growing trend is due to the lower land prices in these more inland and less-developed locations. Specifically, the price of land within one kilometer of Bang Tao Beach has been driven up by large resort developments, in particular the Laguna resort area, which continues to expand.

For property developers to keep their prices in line with market demand, residential developers have had to move to new locations where land prices are lower.

Land prices in central Phuket have been driven upwards in recent years due to the expansion plans by Central Shopping Mall and the plans for The Mall Group (Siam Paragon) to open its new 20-billion-baht BluPearl Mall in Kathu. Adding to the mix is the surge in condominium developments in the area, also adding pressure to the increase in land prices.

Land prices in the south of the island, in general, match those of central Phuket, as the south has seen a steady increase in residential property development due to prices being much cheaper compared with those along the west coast.

The south has a thriving expat community; Chalong marina for boating and diving enthusiasts; access to Nai Harn beach, which is attractive to tourists; and has the necessary infrastructure to support the growing demand.

Yet, while all these price movements have been in play elsewhere on the island, it is the north where the movements are gaining momentum. The increases in Phuket’s land prices have woken investors to the potential of the north, which has excellent prospects to outperform relative to current land prices.

Phuket Pads: Take to the hills for stunning views

Across the land: Harvesting monsoon bounty