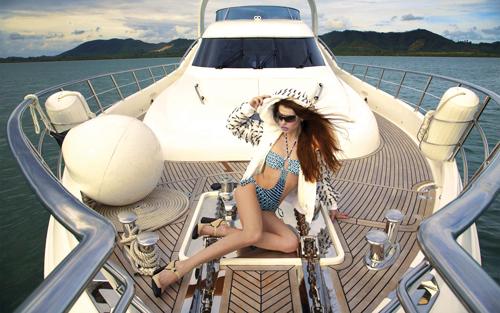 PHUKET: They came, they spent, they left. That pretty much sums up the great Russian tropical cold war of this the high tourism season.

Over the past month or so I embarked on a research project to try to learn more about the surge of visitors from the former USSR to the island of Phuket.

Not content to simply put one nationality under the microscope I wanted to grab a shovel and dig deeper into this mysterious world of the emerging Eastern European outbound market.

So many numbers, so little time. Taking a step back and trying not to fall over any sleeping dogs, in 2012 the estimated overseas visitor draw to Southeast Asian countries topped 88 million, with 1.8 million Russians falling into immigration lines across the region. Thailand drew 1.3 million with roughly 452,000 coming to Phuket.

Looking beyond the numbers, is the fact that 80 per cent of these travellers come during high season from October to April and the bottleneck at Phuket International Airport has increasingly become a house of chaos. Toss in the language barriers, tour bus mania and an entirely new dynamic to the legacy of the tourism market, and the result has been a sharp local backlash.

For a number of years now the island’s hotel rooms have been multiplying at a faster pace than imaginable. Local investors have tripped into a true blue love affair with the prospect of owning a hotel. One by one, these “same same” properties have risen from hills, valleys, flatlands and beaches.

Despite a series of political hijinks, the country has become an accidental economic success story. Government agencies such as the TAT have rejoiced with nearly religious fervor about year-on-year double-digit growth figures. (Note to naysayers: no doubt they have learned well from their American cousins on Wall Street, so don’t blame the Thais on this one).

Asia’s rising middle class, mounting consumerism and low-cost airlines (that are the new buses of the sky) are rolling out more and more travellers. The beast of success now sits at our own dinner table, with an empty plate and is hungrily giving us the eye.

Suddenly Phuket’s collective face is covered in sweat, with a pulse beating like a jackrabbit, and terror starts creeping into the equation. How did this happen? The roads choked with traffic, failing infrastructure and crowds everywhere you go.

As in all things unexpected, next comes the blame game and we are suddenly adrift in the present day, where suspicion, stress, envy and greed are all trying to plunge out through the ‘in’ door.

One topic of my local debate is the concept of zero baht tourism. This conspiracy theory somehow conjures up the notion that there is some secret tunnel running underneath the island to other countries and a Full Monty money train is running nonstop exporting cash elsewhere.

This of course is utter nonsense and those who are inclined to believe it need to return home to their caves before dinosaur feeding time. Last year, Russians brought over 35 billion baht in tourism earnings to this island, and the vast majority of it stayed in the local economy.

Over the past few months we have been looking at the tourism twins of Bali and Phuket. While this island has continued to post growth, the Indonesian counterpart is faltering. Again, look no further then flat trading numbers of Eastern Europeans to our southern shores and it all adds up. The East is the now West, at least for the moment.

Is mass tourism the end of Phuket? Absolutely not, we are only at the beginning of the story but some prankster at life’s bookstore tore out the last page and we have no idea what the ending will be. What is relevant is to take time to have a forward-looking view of the island’s number one economic indicator – tourism.

Master planning, zoning and addressing infrastructure issues would seem a far more intelligent reaction to the unfolding drama than a dead-end witch hunt.

Is more better? You will have to be the judge of that.