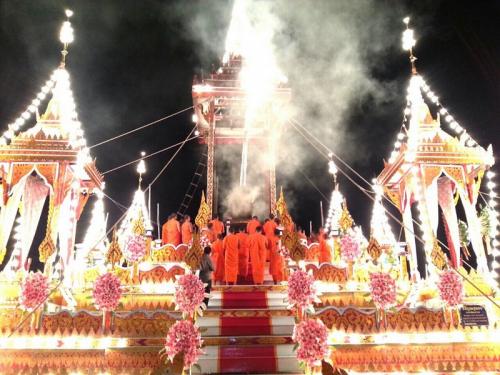 PHUKET: The Governor of Phuket, Maitri Inthusut, all three Phuket Vice Governors and both of Phuket’s members of parliament were present at the cremation ceremony yesterday of the former abbot of Wat Chalong, Phra Ajarn Udomwetchakit Uttamuyano.

Also in attendance were local leaders and the general public, bringing the total number to about 2,000.

The Abbot – Phra Ajarn Lim Wat Chalong, as he was known to his devotees – was born Lim Sitthichoke on April 5, 1925 in Cherng Talay, Thalang.

Phra Ajarn Lim was a healer, offering special treatment to those suffering from bone ailments using a method he learned from Luang Phor Kluam, the most famous and venerated abbot of Wat Chalong.