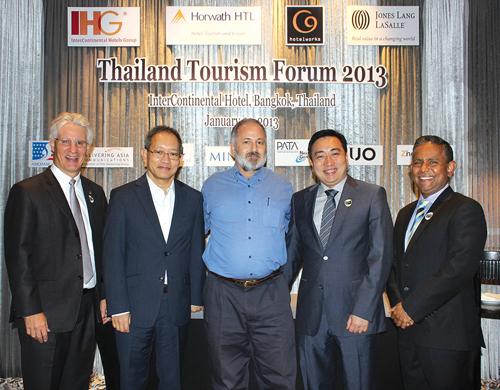 PHUKET: The nation’s pre-eminent gathering of tourism and travel industry experts has concluded that while Thailand looks headed for its best year for tourist numbers and revenues ever, action to legalize gaming, improve infrastructure and attract ‘quality’ travellers was urgently needed ahead of moves to introduce the Asean Economic Community (AEC).

More than 350 tourism industry movers and shakers attended the Thailand Tourism Forum at the InterContinental Bangkok recently, voting on key issues facing the industry and setting alarm bells ringing about Thailand’s long-term competitiveness in the region.

Bill Barnett, co-organizer of the forum and Managing Director of C9 Hotelworks, said that over 60 per cent of respondents at the event who participated in the Thailand Tourism Index survey believed legal casinos would be an important factor in Thailand remaining competitive with other economic and tourist powers in the region.

“Thailand tourism needs to study very carefully the issue of gaming and other demand generators to attain sustained volume growth,” he said. “There is a very real risk of us slipping behind places like Singapore and Macau in terms of visibility, branding and revenues. Thailand is also facing a glut of hotel rooms, so we need big draw cards like casinos as key drivers of demand.”

More than 80 per cent of those voting agreed that Thailand was now staring down the barrel of an oversupply of rooms and that urgent action was required.

Mr Barnett said: “Thailand Tourism Forum – 2013 (TTF) is the country’s first report card on the state of the industry and an opportunity to look beyond the numbers at how tourism performance can affect a country’s entire economy.”

The Tourism Authority of Thailand (TAT) has announced aims to achieve 24.5 million international visitors in 2013, following a 15 per cent increase from 2011 to 2012, which earned the country over 965 billion baht.

Mr Barnett said mass tourism was the ‘elephant in the room’: “As Wall Street learned, nothing grows forever. Thailand needs to learn the lessons of a volatile trading environment and focus on developing stronger infrastructure and perhaps temper growth targets and create more healthy segmentation than simply more, more, more.”

Mr Barnett said the AEC was undoubtedly a ‘game-changer’, and would accelerate the impetus that had been building for a less divided Asean ever since the global financial crisis thrust Thailand and the region onto the world stage in 1997.

“Regional travel has been a key tourism storyline over the past four years with sustained growth,” he said.

“The AEC will only create a stronger fundamental for this going forward. Boosted by rising low-cost airline carriers and a growing middle class, we expect this trend to dominate the market during this decade.”

The AEC comprises the economic integration of all 10 ASEAN member states by 2015, with the goals of creating a single market and production base.

Calls for legal casinos began in earnest last year, when CP Group boss and multi-billionaire Dhanin Chearavanont called for casino licences to be issued for Chiang Mai, Phuket and Pattaya and warned that Thailand was slipping behind regional rivals and allowing ‘underground businesses and dark powers’ to flourish by not taking control of the lucrative gaming sector.

Mr Barnett said more freedom of travel and likely single-issue visas for the entire AEC region also raised security issues for travellers and nations but was not reason to be too pessimistic.

“The Euro-zone has effectively handled this for an extended time and I believe with appropriate technology and increased cooperation between intelligence services and police in Asean that risk can be mitigated. Ultimately, the benefits far outweigh the downside.”

Key issues:
· International arrivals tipped to eclipse the record 22 million recorded in 2012
· The high value of the baht
· Phuket overwhelmingly favored as location for hotel investment in 2012
· Global trends echoed in Thailand, with MICE, health and wellness, and culture and heritage the strongest drivers of tourism demand
· A split vote on the issue of legalizing gaming came down in favor of allowing casinos by a factor of about 10 per cent

Phuket Property: Finding the balance between culture and a modern lifestyle

Phuket Property Watch: Tourism heads off to the mall