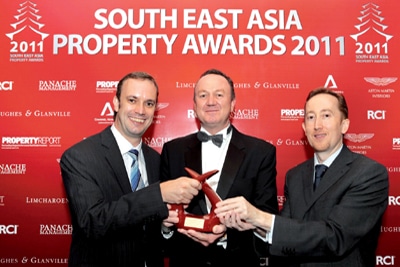 Chris Gordon, owner of The Village Coconut Island said, “We are delighted with this accolade and to be working with the Absolute World Group whose shared ownership expertise and global network has been an incredible asset.”

Set on a coconut-fringed private island, less than five minutes by boat off the east coast of Phuket, the Village Coconut Island comprises a total of 236 2, 3, 4 and 5 bedroom private pool villas and Jacuzzi suites.

A new movie “Phuket: Luxury Living” produced by Red Sky Vision from London was screened this week which was based on a storyline that follows the evolution of the islands property sector. Featured contributors included Gulu Lalvani, Mom Tri, Allan Zeman and Bill Barnett.

The movie can be seen online at PhuketFuture.com.

Bill Heinecke’s MJets was an early entrant and has established a strong business base.

Now Advance Aviation a leading helicopter operator is moving into the market with a recent acquisition of a Gulfstream jet. The aircraft was reportedly purchased from Hong Kong’s Peninsula Hotel.

Plans for the addition of a private jet facility as part of the Phuket International Airport upgrade have been said to be in the works, but a final operator apparently has yet to be chosen.