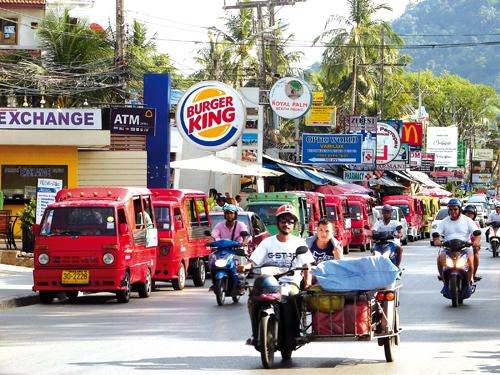 PHUKET: THE beachfront in Patong Bay comprises Phuket’s highest valued roadside real estate, while the most expensive land plots in Phuket Town are valued only 7% less.

An official at the Phuket Land Office told the Gazette that the listing is utilized by the Phuket treasury department as well as the land registration office for “tax purposes”.

The purpose of the list is to try and provide land title registration applicants with a consistent standard, the official said.

However, the official clarified that the prices do not necessarily reflect actual land market prices for any specific plots, and that the list only focused on public street side areas.

After Patong, the next four most highest valued roadside areas on the island are all in Phuket Town – off Rassada, Phang Nga, Yaowarat and Ranong roads, with plots along these roads valued between 60,000 to 140,000 baht per sqw, or a mere 15,000 to 35,000 baht per sqm.

The land official proposed that one primary reason Phuket Town land prices are relatively higher than other parts of the island, is because of its central location for business, history and culture.

To little surprise, Phuket’s lowest valued public road access real estate is in Thalang district, covering most of Phuket’s north, but not including Kamala, which is part of Kathu district.

Although these rates are only a small fraction (about 11-14%) of those assigned to beachside property in Patong, land prices in Thalang are expected to continue to rise rapidly as main roads in the district become increasingly attractive to hotel and condo developers.

As for actual market prices, particularly in the island’s rapidly expanding condominium market, the Gazette‘s property desk notes that anything priced below 50,000 baht/ sqm for a 1.5mn baht 30 square-meter condo, for example, would generally be classified as a “low to lower-middle income” segment property.

And despite the higher price/ sqm for “shoe-box” units, it is not to say that buyers cannot find larger plots of one rai and up (1,600 sqm+) that actually do fall within the Land Department and Treasury valuation ranges – namely, 3.4 to 10mn baht per rai in Thalang, or up to 56-60mn baht per rai in Phuket Town and Patong, respectively.

A quick search on the internet revealed that a plot of land with access to Jungceylon shopping complex and Soi Bangla, sized just over 1 rai, is on the market for 25mn baht (15,600 baht/ sqm)

Meanwhile, on the hill-top overlooking Kalim beach, a slightly-larger-than-one-rai plot with a sea view is going for about 28mn baht (17,000 baht/ sqm)

Another search found that there is a 36-rai plot of land along the bypass road hill for sale for 250mn baht, which can be broken down to about 4,300 baht/ sqm.