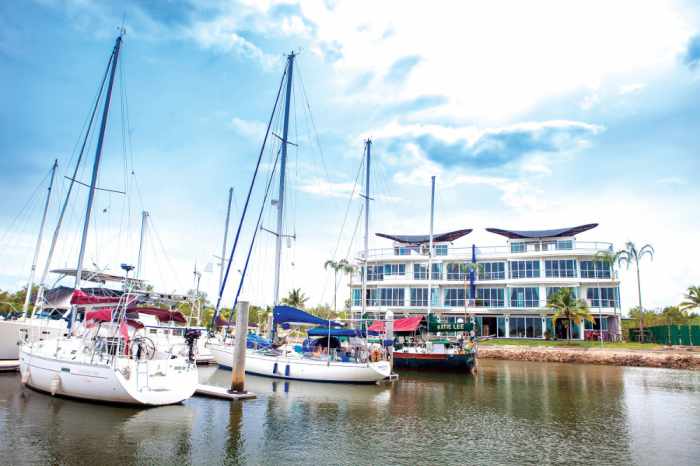 The marina, which opened for business in late 2012, has had a steady flow of Phuket regulars moving their boats to take advantage of the less crowded waters and lower berthing fees. But it’s not just the marina that is seeing solid growth, the first of four buildings in The Cleat residential development has been completed, and 90 per cent of its units have been sold already. The second, third and fourth buildings are set to be completed by the end of the year, and according to Sriya Yongsakul, deputy managing director of Krabi Boat Lagoon, interest is strong.

“At the moment most of the residential customers used to live in Phuket, or are overseas investors who are related to boaters. Surprisingly, it’s the local Thais themselves who want to live in the marina and they also see the upside of the property investment. The professional people, like the doctors or lawyers, have a long-term view of their investment, so they are the ones who buy in at these early stages,” she said.

Assistant Managing Director and Marina Manager Thana Tharadolaparb echoed Ms Sriya, adding that the fast developing Krabi area, with its international airport and new international hospital, now offers amenities that are beginning to rival Phuket, but without the crowds.

“During the high season, private planes have difficulty being allowed to access Phuket airport, so many of our customers are now landing at Krabi, and because we are so close to the airport, it makes it very convenient,” said Mr Thana.

“Phuket is getting too busy, in Krabi we now have an international hospital, there are plans for a big department store and we also have many five-star hotels – the only thing we are missing is an international school, but there is talk about one coming soon.”

Once completed, The Cleat will have 84 units spread over its four buildings, with a wide range of floor plans and sizes to choose from. With the price for an entry-level, 38-square-meter, studio unit starting at 2.9 million baht, the project offers some of the most affordable marina-based residential units in the Asia-Pacific region. Residents also get access to The Clubhouse, a leisure facility featuring a swimming pool, fitness center and library. Also, one restaurant has already opened to serve residents, with more to follow soon.

“We target those that want to live in a relaxing area but also want to be close to the international airport,” said Ms Sriya.

“It is one of the lowest priced waterfront condominiums in a marina in the world, so it is affordable to have a bigger and higher-quality unit, and it’s still only two and half hours by car to Phuket or one hour by boat.”

The project is sold under a freehold strata structure, meaning foreigners can own up to 49 per cent of the units. Krabi Boat Lagoon will also offer a rental management service as a convenience to its customers.

Ms Sriya says the company’s excellent reputation – built on the development and management of the Phuket Boat Lagoon – has helped encourage buyers from Phuket, and abroad, who are familiar with the company’s track record.

“The marina has been up and running for one year now, with many of the same staff from Phuket,” she said.

“The customers recognize Khun Thana, he has been with us for a long time, so when the customers see him, they know they are going to get more or less the same quality.”

The total land space owned by Krabi Boat Lagoon is 80 rai, and so far, 38 rai of that has been dedicated to the marina and The Cleat condominium, leaving plenty of land for future expansion.

“We still have lots of land to develop into other property projects, but right now we are looking at having the marina fully set up, and to get the first four phases of The Cleat completed, and then perhaps we will look at single floor houses and private villas,” she said, adding, “We now have only about one third of the whole development, so this is really what we are calling the first phase of the project.”

For more information about Krabi Boat Lagoon and The Cleat condominium visit: krabiboatlagoon.com

A symbol of prosperity in Koh Kaew

Life’s a beach, even in Phuket