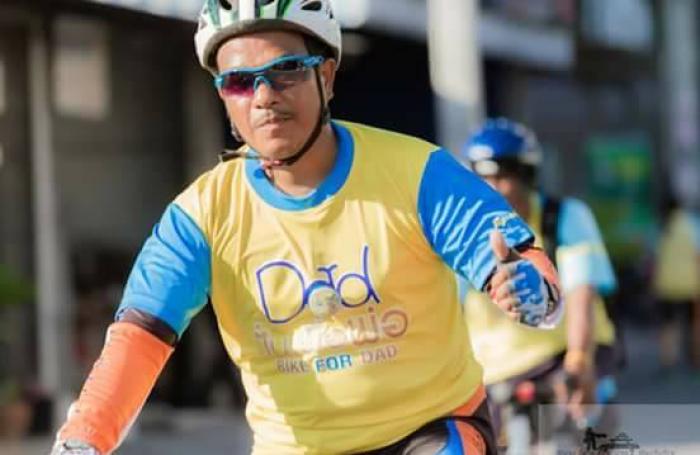 PHUKET: Sophon Pol Kaew In, or Pol, as he is better known to his friends and customers, is currently a taxi and tuk-tuk driver in Phuket and somewhat of a favorite with foreigners. Originally from Krabi, he moved to Phuket at the age of 18, more than 25 years ago.

“I came to Phuket as a young, carefree boy. I didn’t know many people at the time and there weren’t many foreigners here either. My first job was at Savoy Seafood restaurant near Bangla Road, which was the top-ranked seafood place in Patong. I started working as a server and stayed there for three years, before moving to the Patong Merlin hotel,” says Mr Pol.

At the Patong Merlin, the staff were offered an English language class, which Mr Pol took advantage of and that would prove useful to him in his later years. He started out as a busboy and steadily moved up the ranks over the next 15 years to become a restaurant manager.

It was while working at Savoy Seafood Restaurant that Mr Pol met his wife Nattaporn. The two got married and soon started a family together.

“After I moved to the Merlin and became a manager, poor work-life balance began to drastically affect me. Even though I was doing well in my career, I didn’t have much time for my family. I decided it was time to re-evaluate my life and career. It didn’t seem worth it to spend all my time at work and have none left for my family,” says Mr Pol.

With two little daughters and a young wife, Mr Pol searched for other jobs in hospitality, but faced the same problem each time. A chance meeting with a friend who drove a tuk-tuk planted the idea of doing the same in his mind.

“I had just bought a house and could not afford to purchase a tuk-tuk, so I refinanced my house and took out a loan to purchase one. Among my first customers were some Australians I knew from my days at the Merlin. Aussies are the friendliest people I have ever worked with,” he says.

“I promoted myself on Facebook and other social media platforms and also offered tours. My customer base grew and soon I was able to purchase a better tuk-tuk and then a car for my wife.”

Ms Nattaporn supports her husband in the business and manages her schedule in a way that she is able to find time to take the kids to school and bring them back at the end of the day. Both husband and wife have a reputation for being friendly, helpful and punctual, with rave reviews and thank you notes on their Facebook profiles from both tourists and expats alike.

Mr Pol does not concern himself with any ‘mafia’ associations or activities.

“There are both good drivers and bad drivers in Phuket. One of the biggest problems in this business is the language barrier. Sometimes customers don’t understand what we’re trying to say and they become confused and even angry. Other times, drivers are unable to explain the situation and this leads to conflict,” he says.

Mr Pol and his entire family are cycling enthusiasts.

“I first started cycling after a friend suggested it. I was having trouble sleeping at night and also putting on weight because of my sedentary lifestyle. First I started cycling on my own, but now it’s something my whole family does,” he says.

“Before I got into cycling, I looked and feel tired all the time, but not anymore. I am the leader of a group of cyclists called the ‘Samran Group’ which I also helped to form. We participate in various events such as ‘Bike for Mom’, ‘Bike for Dad’ and ‘Kathu Cycling Week’ as well as many other activities. Cycling has become a big part of my life now and helped me to make new friends.”