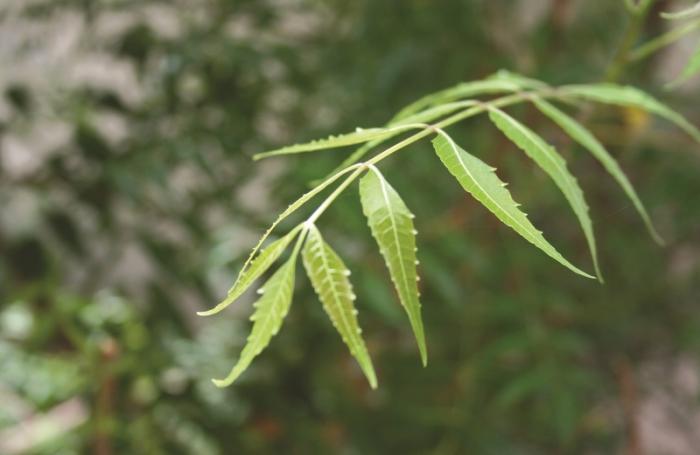 PHUKET: I have written in these columns before about the sadao tree, or azadiracha indica, which we gardeners in Thailand know as neem. But my interest was re-kindled by a reader from Hua Hin who wrote to say he was “looking for a supplier of neem from the sadao tree”. I presume he wants to use it as an organic pesticide or maybe a specific against mosquitoes.

Neem has long been used by Thais, even though in 2009 there was a totally misguided attempt by authorities to ban its use as one of thirteen so-called hazardous plants. Since it was a traditional and cheap alternative to synthetic and often toxic chemicals, there was an outcry by small farmers and environmentalists. Nowadays, you can find it as an ingredient in natural insecticides, or since the tree is common in Thailand, you can prepare your own concoction.

The neem grows readily in tropical areas with a minimum temperature of 20 degrees. Hardy and shallow rooted, it needs little attention. The one in my garden is so vigorous that it needs pruning to keep it manageable. Its leaves are attractively pinnate and rarely drop unless there is a sudden cessation of the water supply. A member of the mahogany genus, it is a valuable timber, fodder and shade tree. Sprays of flowers on the tips of branches and fruits which ripen to yellow make it ornamental as well as utilitarian.

More importantly, and since they are bitter and astringent to the taste, the flowers, foliage and seeds have powerful antiseptic and healing properties. In parts of Southeast Asia, they are used in cooking, both to impart a distinctive flavor and to cleanse the digestive system. Traditionally, the plant has been used as a remedy for diabetes, as a natural worming agent, and even to treat diseases with viral, bacterial or fungal origins. I recently had an Ayurvedic massage in which the leaves were used as a skin emollient.

Known in India as the ‘village pharmacy’ because of its range of properties, the sadao tree is also employed as a powerful and entirely safe source of insecticides. Thais grind up the flowers or seeds, or even boil the leaves, though boiling is likely to reduce the plants powerful prophylactic action. Mixed with water and sprayed on crops, the liquid makes the leaves inedible to predatory insects and prevents their eggs from hatching. Since the tree is common in gardens and grows wild throughout Thailand, our readers should have no problem in finding a specimen. Neem trees can also be tracked down on Monkey Mountain in Hua Hin.

If not, all parts are available in fresh markets. And if you want to grow one, saplings are often sold in plant nurseries. It takes readily from cuttings. The oil, extracted from the seeds, and sometimes used in cosmetics, may be a more expensive proposition. But even the residue from this process, known as neem cake, is a valuable fertilizer.

What other trees, apart perhaps from the coconut, can match the neem’s value and functionality?

Profile: Not your average tuk-tuk driver