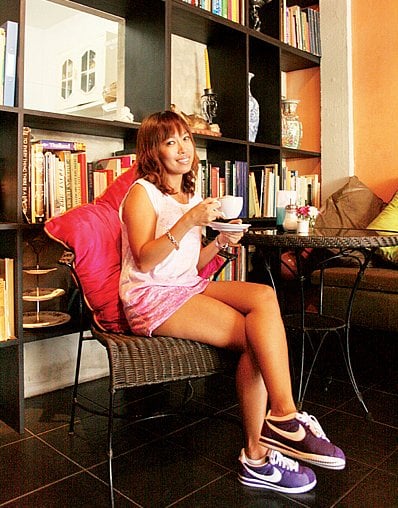 PHUKET: This place is so laid back the staff come here to hang out when they’re not working. The Gallery Café By Pinky is straightforwardly cool. Simple but delicious menu items, music to suit the hipster tone of the décor, and staff who know how to mix business with pleasure.

It’s like ‘Cheers’, but with better looking, petite staff, and without the awful soundtrack.

Thirty something co-owner Tuangporn “Pinky” Jatikavankh, knows a thing or two about how to design a menu to cater to European tastes – a large majority of her customers.

She spent six years in England where among other things she refined her culinary skills at Le Cordon Bleu London. She also picked up an English accent and a love for English football (she’s a Manchester United fan).

“I still love British food, especially full English breakfasts, and this is one of our most popular dishes we serve today,” Pinky said.

While expats nursing hangovers are a mainstay at The Gallery in the “am” on weekends, they are not alone. They rub shoulders with Thai university students and young professionals who mill around chatting with staff while sipping on coffees and green teas.

It’s more of a social club than a café. People waft in and out. Some don’t even buy anything. Tourists amble by, see the crowds and wander in to fish for freebie tourist information, which the staff is more than happy to oblige.

The open-air main façade is another bonus. It’s welcoming and inviting. The street is an unenthusiastic leap away from the café and the din of street noise acts as the percussionist to the Indie music playing in the café, a quintessentially Phuket vibe.

Café manager Agradeth “Amann” Tanhemnayu, 29, is known by pretty much everyone in Phuket Town. He’s a character people come to see here.

Easily recognizable and not easily forgettable by his dress sense and haircut, he is the glue that has set many Thai-foreigner friendships over his 12-year stint in Phuket.

You’ll understand what we mean when you meet him – he’s quite sociable, and likes to chat.

That’s the panache that cafés like The Gallery have. It’s why we go. Sure, the food is great, but it’s also for the people. Don’t come expecting to stay tight-lipped for too long; it might seem out of place.

And The Gallery’s popularity has meant a great year for business.

British co-owner Simon Thomas, 36, said plans are in motion to take The Gallery brand to other areas in Phuket, and even further afield in Southeast Asia.

Simon first opened The Gallery as an antique store in the building next door to the café in 2005.

In 2008, he and Pinky added a café to the store, which became hugely popular, prompting them to buy the building next door, which the two-storey café occupies today. Currently, the upstairs is being turned into a sports bar, due to open next week. Yes, football matches will be shown.

This is a great little place to hang out, sip coffee and make friends. You can even “cheers” late into the night, as in high season the bar stays open until midnight.