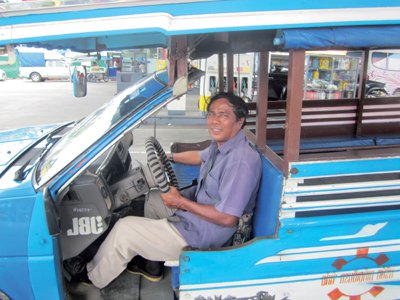 PHUKET: Phuket moves forward into the 21st century, striving and struggling to maintain its name and reputation as a world-renowned destination, island and home.

Along with progress have come problems. A sharp rise in population and increased traffic congestion are among the downsides of rapid urbanization.

One of Phuket’s most pressing issues is public mass transport, or lack thereof.

Indeed, the industry remains much the same as it was decades ago – serviced by open air songtaews, converted-pickup trucks that are an icon of Thailand’s rural countryside.

For instant time travel into the past, one only has to take a stroll along Ranong Road near the new municipal fresh market in Phuket Town.

There you will find the island’s songtaew terminal, where you can board one of these contraptions to take you to just about any part of the island for 20 to 40 baht.

“The songtaew queue system at the market has been the same for more than twenty years,” explained Aroon Sinkala, a 59-year-old songtaew driver who has plied Phuket roadways since the early 1970s.

Around 1987, the Transport Company introduced a regular and orderly queuing system for songtaews to accommodate the budding tourism industry.

“Before that, I couldn’t park my songtaew at the market,” he said, explaining that public transport in Phuket at that time was dictated solely by self-proclaimed “territorial rights”.

Aroon doesn’t miss the chaos of the 1970s and 1980s, when the Phuket economy was still based largely on tin mining.

As he recalls the situation songtaew drivers faced back then, what he describes sounds a lot like the dilemma facing present-day tuk-tuk and taxi consortia on the island.

“Since there were no regular queues or [price] regulation back then, fights between drivers over customers were common and could turn quite vicious and bloody,” he said.

“It was every man for himself and you really had to struggle to make ends meet,” he added.

“Today, vehicles depart on schedule every 10 to 15 minutes. We drivers must stick to the schedule because if we’re late, we’ll get penalized,” he said, adding that any dispute between drivers today is settled by a special committee.

“If a problem can’t be settled between drivers, both will get an automatic suspension [from driving]” he explained.

Asked whether he had ever been suspended, he confessed that he had. “Not long after a committee was established [at about the same time the Ranong Road queue started] I had a dispute with another driver because I didn’t stick to the schedule and left late.

“When the other driver caught up with me, he was angry because there were no passengers, since they all boarded my songtaew first. We had a fight and both got suspended for five days. I never had the same problem or got suspended after that,” he said.

“Rules and regulations are necessary in the transport industry and things are much better with them now,” he added.

Aroon admits that some things were better in the old days, however.

“I remember when a liter of fuel cost 2 to 3 baht for diesel and 7 baht for regular petrol. And there was no traffic at all like today, so it was a lot less stressful to drive,” he recalled.

However, he pointed out that the slower-moving traffic and better road conditions make driving much safer than before.

“Luckily I haven’t been involved in any major accidents myself, but I’ve witnessed a lot of fatal accidents. Most of them were caused by people in a rush who are driving too fast,” he said.

“Thepkrasattri Road used to be only two lanes, with no median strip. There were often head-on collisions. When it rained, the road often flooded and it was dangerous and difficult to drive on.”

“Occasionally there are accidents when speeding motorists hit us from behind when we stop to pick up passengers or let them off. Luckily nothing too serious has happened though,” he said.

Like any form of mass transport, commuters are less enthusiastic about using it during rush hours and tend to prefer driving themselves rather than compete for space in a crowded songtaew. But the peak hours are when the drivers can rake in the most money.

“More passengers means more money. The schedule is rotated to keep things fair, so our daily income varies. It’s enough to get by though,” he said.

Aroon went on to talk about a time when songtaew driving alone was not enough to get by.

“The economy was bad and it became difficult to make ends meet. By 2002, I sold my songtaew and got a new job driving a passenger van for Phuket FantaSea in Kamala. I started off earning about 7,500 baht per month, which included health insurance. After several years driving the van I was making nearly 9,000 baht per month. It was good to have a steady income,” he said.

“I decided to take a small house loan for what would be my first and last house. The loan was only for a few hundred thousand baht, and the house was small but simple enough for me, my wife and two sons. However I couldn’t afford to pay the monthly interest on the loan and defaulted within the first year. The house was repossessed. In 2009, I couldn’t continue driving for FantaSea because I was of retirement age.”

Instead of receiving a monthly pension, he chose the option to receive one lump sum payout.

With that money and some other savings, he bought his current songtaew and continued to drive the Sarasin route, just like he did before.

Riding works of art in Phuket