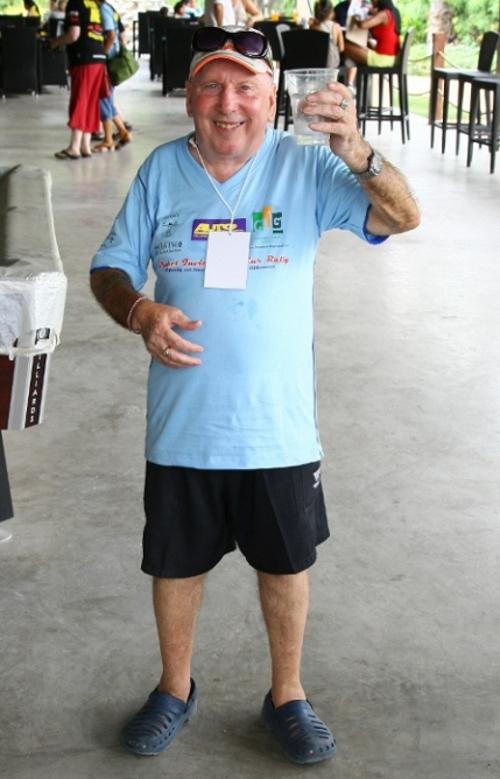 PHUKET: While many were having a Sunday lie-in on March 10, dozens of drivers, navigators and their families headed to Chalong for the Phuket Invitational Car Rally 2013.

More a treasure hunt than a race, the annual rally took 45 cars over 153 kilometers of some of Phuket’s lesser known roads, sois and tracks including some secluded scenic routes seldom travelled. Along the way entrants had to take pictures of locations and landmarks to prove that they hadn’t taken any shortcuts.

The lunchtime halt this year was at Adventure Mini-Golf in Cherng Talay where each crew completed nine holes as a competitive element of the rally. There was also a 10-question quiz.

After carefully navigating the hills of Patong the cars headed past Laem Promthep to the finish line at Chalong Pier Beer Garden to unwind before a buffet dinner and prize-giving at Kan Eang @ Pier.

The triumphant winners this year were the “3G” team of Kanya and Peter Notley, who received the Auto Express trophy from Khun Saksri Kerdphol. Other prizes included “Best Female Team” and “Best ThaiTeam” both won by “Phuket Pearls” Wanida Hongyok and Nanthapa Pengkasem.

Due do impeccable organizing and the tireless work of stewards and marshals along the route, this third rally went off without a hitch and is now firmly established as one of the most enjoyable driving experiences you can have in Phuket.

The Phuket Invitational Car Rally is proudly sponsored by the Phuket Gazette, PGTV and the nationally televised Phuket Today show on UBC/True Visions. Phuket Today, co-produced by PGTV and MCOT World, will be providing coverage of this event. The half-hour show runs six times a day, seven days a week, on channel 99.

Phuket Environment: The rime of the ancient mariner