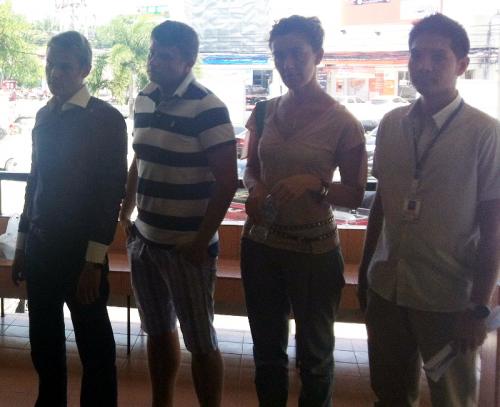 PHUKET: Phuket Immigration officers yesterday raided a software design office in Rawai, where they arrested six foreigners, half of them Russian, for working illegally.

Phuket Immigration Investigator Chidchanok Sakornyen led the raid, which saw his team of officers enter the site at 12:30pm.

We found six foreigners working as software and web design consultants and operating a website. We questioned them and asked to see their visas and work permits, he told the Phuket Gazette.

“Marin Batura, the managing director, 33, and Nikolay Evdokimov, the director, 32, both from Russia, had the correct visas and work permits, but the workplace address cited in their work permits did not match the place where they were caught working,” Lt Col Chidchanok explained.

Marina Efremova, the web designer, 43, from Russia; Denys Kravchenko, the web coordinator, 30, from Ukraine; and two from Belarus, Aleksandar Lyah, the financial officer; and Sergey Kazei, the programmer, 26, were all found working without work permits, Col Chidchanok added.

“Ms Efremova, Mr Kravchenko, Mr Lyah and Mr Kazei were all charged with working without work permits,” he added.

All six suspects were taken to Chalong Police Station to have the charges against them recorded and for further questioning. According to Col Chidchanok, Phuket Immigration did not have the authority to process the charges and investigate this case by themselves.

“We had to hand the foreigners over to Chalong Police in this case. For more information, you will need to ask my boss,” he told the Gazette.

Phuket Immigration Chief Sunchai Chokkajayki was not available for comment.

Through negotiations between immigration officers and the lawyer representing the foreigners, it was agreed that reporters could name the suspects but not the company they were working for.