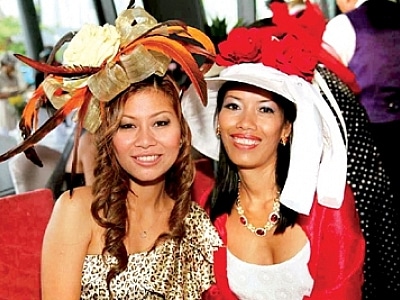 PHUKET: Celebration of Australia’s premiere thoroughbred horse race, the Melbourne Cup, is in sight again with Phuket punters under starters orders and waiting for the off at the Andara Resort in Kamala on November 1.

This is the second year that the Soi Dog Foundation has organised another prestigious paddock gathering to mark the “race that stops two nations”, when Australia (and New Zealand – as much enamoured of this spectacle) come to a stand still for a turf race which lasts for just over three minutes.

Of course, it’s not just about watching a collection of the world’s finest fillies, colts, stallions and mares cantering around Flemington Racecourse in Melbourne – it is a jewel in the social calendar’s crown and a milliner’s Disneyland.

Organizers suggest that the finest apparel should be worn along with the obligatory haute couture headwear. If your wardrobe does not include a hat that cannot fit into a small car, or your local fashion emporium does not stock the latest Stephen Jones collection – then try your hand at designing and making a unique, even outlandish, item of headgear.

The program starts at 9am and the main race will be shown live at around 11am Phuket time. Past the post celebrations will be followed by “Fashion on the Fields” with prizes for the best dressed lady and gentleman. Hats are a separate entity and a prize for the individual sporting the best bonnet will also be awarded.

Prizes for Phuket’s satellite event may be a tad shy of the Melbourne Cup’s US$6 million total prize money (out of which US$3.3mn went to the winner, Americain, in 2010), but there will be an opportunity to win two tickets for a Strategic Airlines (soon to be renamed Air Australia) flight to Brisbane or Melbourne from Phuket.

The person who spends the most money on raffle and sweepstakes tickets on the day will earn that prize. Tickets are 1,800 baht which also includes a buffet lunch and welcome drinks.

Starting gates open at 9am with raffles and sweepstakes organised to raise funds for the Soi Dog Foundation and the Barnhem Muang Mai home for children and families in need.

The Melbourne Cup at Andara is sponsored by the Phuket Gazette.

Phuket cinema – A film that makes you laugh and cry