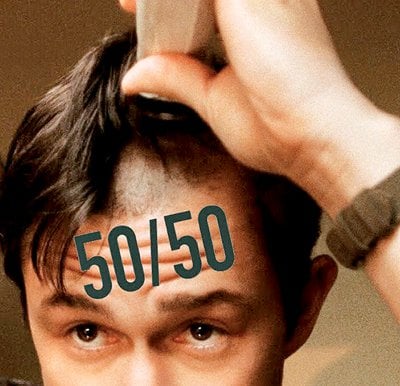 PHUKET: Leave it to writer/producer Evan Goldberg (Superbad, Pineapple Express) and actor Seth Rogan (of the same films) to make a movie about cancer that is full of hilarious, raunchy comedy and still manages to possess heartfelt sincerity.

50/50 is a rare kind of film. Its themes of comedy and cancer play out much like a sickness does – calming yet anxious, funny yet heartbreaking. It’s an ambivalent experience to watch 50/50 and its steady back-and-forth exchange of these elements; yet it’s perfectly paced and expertly filmed.

For anyone who has ever had to battle a life-threatening disease – either alongside a loved one or being diagnosed with one themselves – there is an honesty to 50/50 that makes it one of the best comedy-dramas of the year.

You get the feeling that only a person who has actually lived through cancer could pull this off so successfully, which is indeed the case. The film is inspired by the true story of Will Reiser, who wrote the screenplay and is a survivor of the same cancer that the main character is diagnosed with. The dialogue between his characters flows effortlessly with the acting talents of Gordon-Levitt and Rogen, and is the core of the film’s wit and emotional punch.

In a scene that perfectly defines the film’s unique appeal, Kyle (Rogen) tells his just-diagnosed friend Adam (Gordon-Levitt) that his 50/50 chances of surviving cancer are actually quite favorable casino odds. He proceeds to name a number of celebrities who have survived cancer, and then unknowingly names one that died from the disease. When Adam calls him out, Kyle tells him to forget he mentioned the name.

Scenes like these drive 50/50 from a potentially awkward state of misplaced humor to an original and moving film for a younger generation. Adam is 27 years old, an age that treats a diagnosis of cancer like an impossibility at first. His best friend Kyle is more equipped to give advice on how to pick up girls for one-night stands than he is to handle his buddy’s serious illness.

But just as it often happens in real life – the illness becomes both the central conflict and the means by which each character reveals his true nature.

While the film focuses on Adam, it is full of colorful characters – both equipped and ill-equipped – who must confront the grim realities of cancer. Like most mothers of single twenty-somethings, Adam’s mom is so preoccupied with being worried that she forgets to see if there is anything she can actually do to help.

His girlfriend (Dallas-Howard) is from the start not quite the right girl for anyone, let alone a guy diagnosed with cancer. His fresh-out-of-school therapist (Kendrick) means well but struggles to grant Adam the honesty he needs to cope with the illness. The two old men who share a chemotherapy treatment room with Adam (played by Matt Frewer and Philip Baker Hall) – smoking pot and giving the enlightened wisdom of old people who are done with formality but not a sense of humor – steal every scene they’re in.

Despite playing virtually the same character in just about every role, Seth Rogen is one of the few comedic actors who can actually pull off the type of humor needed for this role. His zero-restraint banter and signature deep-gut chuckle help give the film its exceptional tone.

At its worst, 50/50 is the latest raunchy comedy about life and love in the city. At its best, it is a thoughtful meditation on what it is to be faced with the possibility of dying too young – and how the worst things in life have a way of revealing the best things from the most unlikely places.

Phuket to put its hat on for the Melbourne Cup