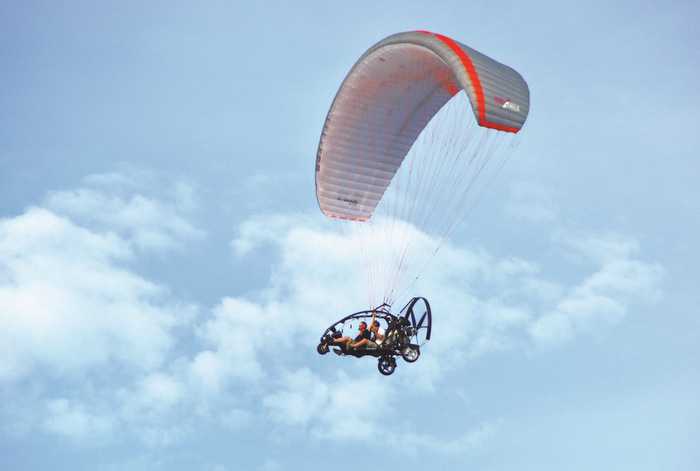 PHUKET: Picture this. You are trapped in rush-hour traffic near Central Festival Phuket. It’s late afternoon, the skies are clear and the temperature perfect. But you are hardly enjoying these conditions as you slowly descend into Phuket’s first Bangkok-style highway underpass.

Just before you go subterranean, however, you catch a glimpse of something soaring not too high in the sky above you. With its broad 20-meter sail it sweeps out large, lazy arches in the sky – almost as if mocking the poor gridlocked souls trapped in the traffic nightmare below.

Is it a bird? Is it a plane? No, it’s somebody in a paramotor – one Phuket’s fastest growing and most

Those who want to experience paramotoring now have an exciting new option to take to the skies safely with the recent opening by Sky Club Asia, one of the island’s first fully-certified paramotor schools and flight centers, located at Phuket AirPark in Pa Khlok.

The new facility in Phuket is Sky Club Asia’s second in Thailand, following the success of its first operation at the Hua Hin Airfield in Prachuap Khiri Khan province.

Sky Club Asia is a collaboration of two parasail enthusiasts: American Mark Silverberg and his German partner Paul Derstroff. They were encouraged to open a second operation at Phuket AirPark by Pat James, who oversees safety and air-traffic control operations at the privately-run airfield.

The center is now fully operational and gearing up for the coming high season in a big way.

The partners have very different backgrounds. Mark has years of experience in art print making, while Paul holds a degree in mechanical engineering and has 15 years of experience in marketing management for international firms. But what they share is a love of paramotoring – a sport they are now keen to introduce to Phuket.

Already, the SkyClub team has brought over 500 newcomers into the sport and despite the recent launch of the Phuket facility, they are already planning to open new centers in other parts of Asia.

Both in their mid-40s, Mark and Paul fit the typical demographic of paramotoring enthusiasts. Their firm, Sky Club (Thailand) Co Ltd, is a registered company under the US Treaty of Amity, and its paramotor school is fully licenced by the Royal Aeronautic Sports Association of Thailand (RASAT), the organization that oversees sports aviation.

While most paramotor activities on the island used to be centered near the abandoned tin mines along Chao Fa Thani Road in Wichit, that looks likely to change with the arrival of Sky Club Asia at the Phuket AirPark.

Phuket AirPark is in a great coastal location with a soft, grass runway that is very easy to reach – even during rush hour. The park also played a major support role in some of the exciting aerial competitions that were part of the 4th Asian Beach Games here in Phuket from November 14 to 23.

The Air Sports competitions alone had a total of 12 medals up for grabs in paragliding, as well as powered paragliding (paramotoring). The finals for both events, held at Chao Fa Thani on November 21, were a must-see for all local aviation enthusiasts.

“Thai people are very interested in paramotoring and generally have a very positive view of the sport. In fact, Thailand is already one of the biggest paramotoring nations in the world.”

Stay tuned for Part 2 of “Para-normal skies above”, coming soon.

History: Nakhon Sri Thammarat – The short-lived kingdom of the South