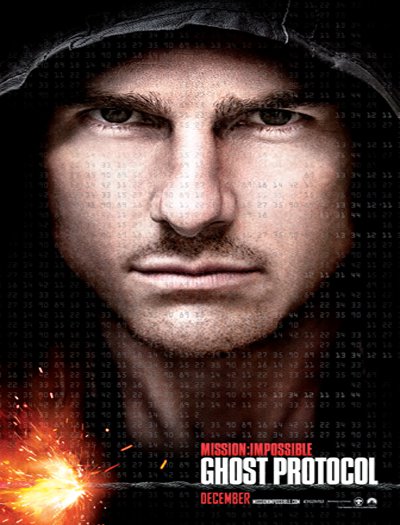 Directed by Brad Bird (The Incredibles and Ratatouille), the film is about Russian terrorists who steal nuclear missile launch codes to try to start World War III.

The IMF is shut down when it’s implicated in the bombing of the Kremlin, causing Ethan Hunt and his new team to go rogue in order to clear their organization’s name.

But the story line pales in value to the astonishing action feats which include Tom Cruise scaling Dubai’s Burj Khalifa, the tallest building in the world, with a gigantic sandstorm rolling in on the horizon.

This is Bird’s first venture into live-action films after working with Pixar’s blockbuster animations, and he certainly knows how to think big.

Almost 30 minutes of the film was shot with 70mm IMAX cameras, giving every conceivable advantage of the extra clarity and over-sized frames to build excitement – which he does with a thumping soundtrack.

Simon Pegg (Paul and Shaun Of The Dead) provides the comic relief, as he and Cruise sneak into the Kremlin using gadgetry that would put James Bond’s tech team to shame. Paula Patton brings poise and warmth to the requisite spy-babe role, and Jeremy Renner (The Hurt Locker) plays a charming data analyst with a secret.

Simple yet effective stunts, such as Cruise leaping onto a moving van, are beautifully filmed, and despite Cruise nearing 50, he plays a convincing action hero.

Mission: Impossible – Ghost Protocol throws in a couple of nice surprises in its final minutes, which leaves you wanting more impossible missions from Bird soon.