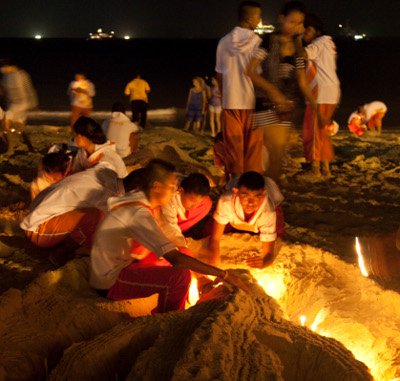 PHUKET: A dignified silence settled over Patong Beach yesterday evening as hundreds gathered to light candles in remembrance of the people who were killed or went missing in the 2004 tsunami that devastated Thailand’s west coast.

The ceremony started at 7pm with a performance by Phuket Rajabhat University’s students, which was followed by the opening speech by Governor Tri.

“I was the governor of Mukdahan province when the tsunami struck Phuket in 2004. I remember donating many things for those who were affected by the tsunami,” said Governor Tri.

“It was sad that we lost so many lives and so much was destroyed. But we saw how people care and are willing to help each other. The tragedy was sad but everyone showed their generosity and never left anyone to suffer,” he added.

“I would like to tell all Phuket residents, Thai and foreign, who either live here or plan to visit in the future, that we now have a comprehensive operational emergency warning system. You can be at ease when you stay in Phuket. Any unusual [seismic] activity will be detected by our early warning system,” Governor Tri emphasized.

The opening ceremony was followed by a prayer by Pastor Brian Burton.

The highlight of the memorial service was a candle-lit ceremony, during which mourners placed candles into holes dug into the sand to form intricate designs along the beach.

Not wishing to give her name, one tearful woman clutching two lit candles told Phuket Gazette, “I am from Germany. I was here with two friends on the morning of December 26 when the tsunami struck Patong. I was the only survivor to make it back home.

“I come to Patong Beach every year at this time. I want my two friends to know that no matter where they are, I will always remember them. I would return for December 26 every year, even if there weren’t a memorial ceremony,” she confided.

“I didn’t lose anyone [in the tsunami]. I’ve just moved to Phuket for work,” said Wijit Thammasorn, a hairdresser in Patong.

“Today is my day off and I was just out walking around the beach area. I didn’t know about the ceremony until I walked by. It felt like something pulled me here,” Miss Wijit said.

“I arrived for the beginning of the ceremony. Listening to it I got goosebumps and started to cry for no reason. I will light a candle and pray for those who lost their lives in the disaster,” she added.

As part of the memorial service, the OrBorJor organized a public debate during the morning aimed at educating the students of Phuket. Dr Smith Dharmasaroj, former head of the National Disaster Warning Center, staged a public discussion on disaster management.

“We should consider including a study of natural disasters in the high school curriculum. Students should have a basic knowledge of what to do in response to a tsunami, wildfire or flood,” said Dr Smith.

“It’s been seven years since the disaster. We should have better warning system, not only along the Andaman coast, but also along the coast of the Gulf of Thailand. The big waves that hit the Gulf of Thailand on December 25 indicates that we need a better system. Luckily, no one died and no people were injured,” he said.

In his closing address, Dr Smith stressed, “Don’t listen to tsunami predictions by people who claim that they know. Tsunamis are unpredictable. All we can do is monitor for unusual activity and then give a warning of when it will hit land.”