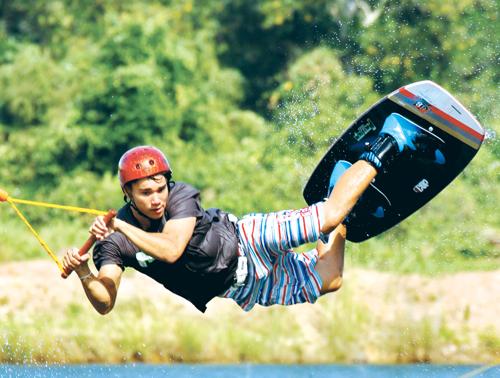 PHUKET: As the final hours of daylight waned in the sky, I pulled my rusty old BMW up to the ridge of a tin mine-turned-lake, home to Anthem Wake Park, across from Wat Manik in Cherng Talay.

Pausing but for a moment to study the deep blue water, the lake was both tranquil and alive.

However, this tranquil introduction was soon interrupted by a Japanese pro wakeboarder who attempted a massive aerial maneuver on the lake trying to land ‘that big trick’. He smacked the water with a deafening thud.

It was then that I knew cable wakeboarding wasn’t going to be as easy as some people make it look.

Construction on the park began in December of last year and took only a few months to complete. Anthem has six posts erected at 120 degree angles to give the rider a smooth transition from tower to tower and is 11.5 meters tall (the height of a cable line affects its tension and overall feel).

“We’re always gonna have riders coming through,” says Rebecca Lek, Anthem Wake Park’s director of sales. “This is the first cable park in Asia running on a clockwise cable. A lot of [riders] only know their home cable, which is probably counterclockwise.

“That’s the thing about cable rats,” adds Rebecca through a sheepish grin. “If you know that somewhere has one of the best cable parks in the world, you’re gonna go there to say ‘OK, check. Done.’ People who are not used to [the clockwise] direction can improve their overall proficiency as a rider.”

Another unique feature of the new park is its Sesitec 2.0 cable system, which allows beginners to try wakeboarding without fear of being dragged long distances by the cable or having it pull them too quickly.

The 2.0 line is run by an operator who manipulates the line so that you have a chance to gain footing and become comfortable on the board before trying the main line at speed.

Rebecca was kind enough to allow me a test run on the track, starting off on what I call the “kiddy cable” (the 2.0 line) and later graduating to the “big boy cable” after testing my mettle. It was great fun and if you’ve had any experience wakeboarding or water skiing I’m sure it will be a breeze. While I’ve never done either of those things, I do have good balance from surfing for several years, which helped me with the mechanics of the board.

While testing the track, I had the chance to catch up with a current wakeboarding legend, 27-year-old Israeli pro wake boarder Lior Sofer.

“This is my tenth year riding now. I started because when we were young we would take family trips to the North [of Israel] and my friend who used to own a boat would tow us with a boogie board and one day they said, ‘Hey, let’s put the kid on skis’,” says Lior.

The culture of riders at Anthem reminds of my early days learning to surf. The whole crowd is very supportive and cheers loudly whenever you do something right – even if it’s just standing up for the first time. Conversely, is a spectator sport and everyone watches as you go. So, when you wipe out, you can be assured that everyone saw and the collective groan is audible as it’s happening.

I felt fine immediately after wakeboarding but was so sore the next day that I found it hard to lift my arms higher than my chest.

I also experienced something I lovingly call “the walk of shame”. That’s what you have to do if you wipe out on the far side of the lake, where you’ll need to swim to the dock, then walk a few hundred meters back around to the launch. Along the walk you’re surrounded by beautiful nature and given the chance to reflect upon what went wrong (in my case it was hubris).

Rates are two hours for 400 baht, four hours for 600 baht, or an all-day-pass for 750 baht, making it much more affordable than some other parks. The owners of Anthem say it has become a popular attraction for local schoolchildren from schools such as PIA, BIS and Kajonkiet and it is also a hit among professional riders, especially during the low season.

A group of Japanese pro riders have recently made Anthem their temporary home because in Japan they no longer have a cable park. This is also the case in Israel where the only park has been shut down for six months to undergo repairs.

Plans to keep Anthem moving forward include a new clubhouse, to be constructed on the ridge overlooking the park, which the owners say will help contribute to the overall social experience of the park. There are even plans to add on-site bungalows, which would extend riders’ stays sometime in the next few years.

Professionals from the Philippines and the UK will be in training at the park over the next few weeks in anticipation of Anthem’s official grand opening in July.

“It’s a big difference [going clockwise],” says Lior, who is sponsored by Monster energy drinks. “In the US you drive on the right, here you drive on the left. It’s the same thing when riding a board.

Rebecca, along with Khun Yok, the park’s managing director, say having Lior and other pro riders around helps to inspire local kids to reach greater heights.

“We feel that Lior is such a great rider and he has a lot of huge events around the world and for him to come to Phuket to ride. The kids here love him. Every weekend they say ‘Where’s Lior? We want to see him ride’. It’s kind of inspirational for them to see. They learn and see the tricks that he does and think… ‘hmm OK, let’s try this’.”

Asked what advice he would give someone just beginning the sport Lior says: “First of all it’s fun. It’s not scary, you don’t get injured frequently. You look at pro riders who take it to the extreme and you think it’s scary, but that’s just because they took it to an extreme. Anyone can do it, it’s just water. It’s something everybody can do, from age nine to 70.”

Khun Yok adds that Anthem will be the staging ground for wakeboarding competition during the 2015 Asian Beach Games and will also help host water-slalom.

Located three kilometers from the Heroines’ Monument, towards Laguna, turn left into the gate for Wat Manik. Anthem Wake Park is open daily from 9am to 6:30pm. The best time to come is late afternoon, as the weather cools.