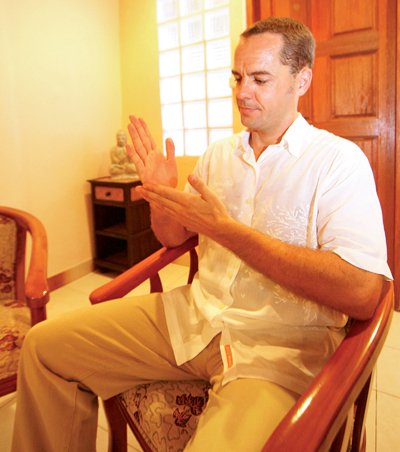 PHUKET: My eyelids are pinched together as the man taps repeatedly on my throat with his fingers.

There’s no pain. The tapping stops, there’s a shift in the room and I can feel him now sitting across from me, a few feet away, staring at me, studying my expression.

He says nothing, just sits silently and waits for me to take another drink of the poison in my hand. I do. The taste is revolting. It’s like someone peed into a beer can. Even the can feels uneasy in my grip, coated in an invisible lacquer of foulness.

I want to drop it. The last sip is the worst. There’s a gag reflex somewhere in my throat, but I manage to keep it down. I open my eyes. I am back in a small office in Chalong.

Thirty-four-year old Briton, Tim Robins, is smiling back at me looking pleased with himself. He sits straight-backed, wearing white linen attire and no shoes. We both know that something out of the ordinary had just happened. He has distorted my perception of what beer tastes like. He has ruined beer for me. He is a genius.Thirty minutes earlier, he ruined cigarettes for me. How does he do it?

That was five months ago, and that was the only Emotional Freedom Technique (EFT) session I had with Tim. It’s all I needed to sideline cigarettes from my life, although they do still loiter somewhere in my field of subconscious. I am still wary of every beer after that day. I still smell pee sometimes when I think of beer.

Like I said, Tim ruined beer for me, but I did ask him to. It was research for this story. A form of psychotherapy, EFT is also known as “tapping” due to practitioners’ using two fingers (index and middle) to tap on emotional blockages on the body. In my case, the blockage Tim was trying to help me with was my addiction to nicotine, but we also did an experiment with beer, which produced amusing but foul-tasting results.

EFT is based on the idea that energy flows around the body on meridian lines, which can become blocked by negative emotions. The tapping follows the same principles as acupuncture to release energy, but without needles. By Tim tapping on my throat, or wherever I felt an emotional response to a subject we were discussing – cigarettes, alcohol – he was able to hone in on a blockage (mainly in my throat) and tap on it while saying aloud his EFT mantra.

At the end of one session, I no longer felt the need to pick up a cigarette and the thought of beer made me want to vomit. EFT derives from Thought Field Therapy (TFT) of the 1980s, morphed from Kinesiology. Both fields are evolutions of ancient Eastern meridian energy techniques, dating back to 1000 BC. But don’t roll your eyes just yet. It works.

Professional golfers on the US PGA are tapping; health boards in the UK use it to treat trauma patients and the www beats with the sound of a million followers spreading the word of the tapping movement. It can help with disturbing emotional blockages which can cause physical pain, anxiety, depression, phobias and – yes – addictions.

New Year is always tough. Self-help books with titles like Stop Smoking Now, or Managing Your Career in 10 Easy Steps are on the lips of people catching the New Year’s bug. This article is part of the resolutions crowd, too. I acknowledge that. I deplore people telling me what to do, or how to live my life, and I guess you are the same. That is not the intention. The intention is to – well – let you know that this technique, the one they call EFT, is here in Phuket if you want to smash the hell out of a few emotional blockages you never knew you had.

If you are going to buy into the “lets-be-that-person-I’ve-always-wanted-to-be” gush, then there are far worse ways to spend an hour than with Tim.

In one session with him I cried, thought beer was pee, almost vomited, laughed, thanked him, felt a million times better about myself, and most importantly, no longer felt the need to smoke.

If you would like to find out more about EFT on Phuket visit timrobins.net.

Phuket Lifestyle: Where the seafood’s @