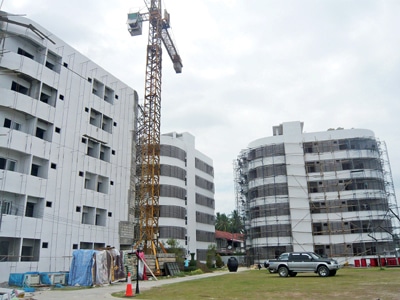 PHUKET: When news about Thailand’s deep South breaks in the press, images of strife and unrest are quickly conjured up.

And while this article is an update about a massive uprising in the heart of downtown Pattani, one of three troubled provinces near Thailand’s border with Malaysia, this latest development does not feature any unrest, but rather cranes and concrete pillars. Indeed, Pattani is on the verge of a boom and the numbers are explosive.

The Pattani Place project is a 600 million baht development on a 10 rai (16,000 square meters) plot of prime real estate in the central business district of Pattani City.

The development is currently undergoing its fourth and final phase of construction: a 200 million baht commercial shopping complex. The Pattani Mall will feature a world-class Halal food center in addition to a vast array of retail stores.

With a target completion date set for September this year, the five-story mall will be the final addition to what looks to be a lucrative venture that will further stimulate the economy in the troubled South.

Projects already completed in Pattani Place’s portfolio include a 60-room four star hotel touting three-star prices and complete with a seminar room and two additional conference rooms; and a four-building, 260-unit condotel complex that is reportedly already sold out. The quick sell-out is no surprise considering that across the street from the site is the Prince of Songkhla University Pattani Campus.

Another key dynamic of Pattani Place’s offerings is its International Education Center (IEC) which fills a demand by providing local students with an outlet for advanced language and academic tutoring, thus eliminating the need to travel to neighboring provinces. Moreover, there is a 13-unit home office block, and an outdoor activity ground, all of which are currently in operation.

Pattani Place is a star-project of DRS development Co Ltd, headed by Ibrorheng Cheali, the firm’s CEO, a devoted muslim and respected figure among the business community.

DRS is also behind the spectacular roof on the terminal building at Bangkok’s Suvarnabhumi International Airport.

The firm’s team of engineering, development and hospitality professionals are based out of Bangkok, Haad Yai and Phuket.