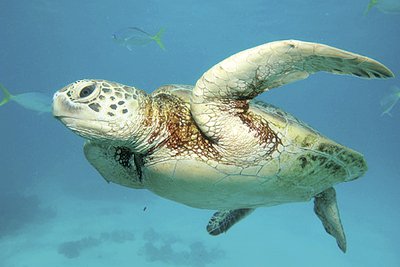 PHUKET: As I watched my first rainy season blow in over the Andaman Sea in frightful gusts, I assumed it was time to pack up my dive gear and head over to Kata Beach with a longboard.

However, I wasn’t ready to throw the flippers overboard completely, because unlike Khao Lak, Phuket dive companies do run low season trips daily, so I said a prayer and decided to give “low season” diving a go.

Given the potential weather, I booked with one of the bigger day boats leaving Chalong Pier, Andaman Safaris’ well-equipped Chok Som Boon, which translates to “complete luck”.

It’s a gorgeous Sunday as we make our way out to Koh Phi Phi for our first two dives. The prevailing monsoon winds that tend to rip down and across Phuket’s west coast are not to be found. The sun has already warmed the top deck, making it the ideal place for a morning nap.

After a brilliant first dive, we splash in at Bida Nai for another.

Despite my briefing, I’m expecting relatively low visibility and a strong current when I hit the water – why else is it considered low season? Yes, our first dive at Bida Nok, perhaps Koh Phi Phi’s best dive site, had pristine diving conditions, but that must have been a fluke.

It wasn’t. The visibility at Bida Nai is stunning as we drop down to the reef.

Keeping in mind where our heads and tanks are, we work our way through a spacious swim through, easily avoiding a couple of lionfish floating in the shadows, and then we move out along the skirt of the reef.

Less than five minutes into the dive we encounter a sea turtle gobbling up mouths-full of bubble anemones – the highlight of a dive any day of the year.

A deep breath out, along with a release of air from my BCD, and I kneel on the sandy seafloor.

Not oblivious to us, but unperturbed by our presence, the turtle moves from one frothy bouquet of bubble anemone to another, taking several big bites from each as it goes.

Knees in the sand, I am awestruck – this is diving in the low season? But it’s picturesque.

We are lucky to get all day sun, but what everyone is seeing: leopard sharks, octopi, blue spotted rays and sea turtles – all that is pretty standard, he explains.

So that’s “low season” diving. You just pop a couple of Dramamine in case the ocean gets rough in the less predictable weather and then can get pumped up about diving the eastern leeward side of some islands.

Sure, if a small storm does kick up it’s nice to be on one of the bigger boats, and you might have to switch dive sites from the unprotected pinnacles of Shark Point to the wall of Koh Doc Mai, where we had a run-in with a tiger sea horse and an ornate ghost pipefish.

Really, the biggest difference must be that on a bad day aboard the boat you might have to give up some topside sun time (as it’s probably raining), but you can still score some beautiful bottom time.