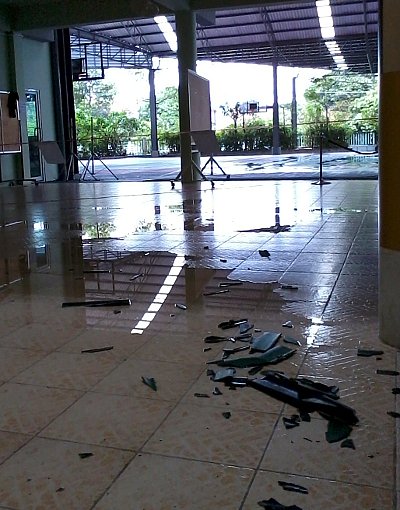 PHUKET: Children at Phuket’s Kajonkietsuksa School on Chao Fa West Road, Wichit, were evacuated from the school this afternoon after strong winds tore open a section of roof, allowing the driving rain inside.

Rattana Ketkul, financial manager at the school, confirmed to the Phuket Gazette that no children were injured in the incident, but the students were moved to another building.

“We have called the parents to ask them to come and collect their children,” said Ms Rattana.

She explained that the whole school was being evacuated as a precaution.

The section of roof that was damaged was not large, but some of the broken roof tiles fell into the building, prompting concern from teachers at the school.

“Also, flood waters were entering the school building. The water was not deep but we were concerned that the children might slip and hurt themselves,” Ms Rattana added.

The school will be closed tomorrow.

“We should open again by Monday, when the roof is fixed and hopefully the weather is back to normal,” Ms Rattana said.