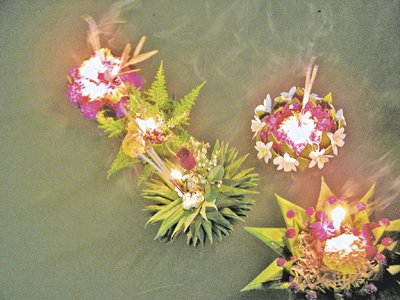 PHUKET: Thailand is beginning preparations for Loy Krathong tomorrow, one of the most colorful Thai festivals.

It is a time to give thanks to the goddess of water and seek forgiveness for past misdeeds.

The festival always occurs on the evening of the full moon of the 12th Thai lunar month which this year falls on November 28.

Loy literally means “to float,” while Krathong refers to the lotus-shaped vessels containing candles, incense and flowers, which participants float down rivers, lakes, ponds and the sea.

The festival also includes beauty pageants, fireworks and krathong making contests using materials such as banana leaves and trunks, coconut bark or paper. Each province has its own special features in celebrating this annual tradition, also known as the ‘Festival of Lights’.

A float can be as elaborate or as simple as you like. If you have a creative impulse to make one, try the following method:

Traditionally banana leaves are used to make krahtong, and for good reason too. They are easy to find, light and biodegradable. Stay away from the ubiquitous polystyrene foam, which takes years to disintegrate.

If you are lucky enough to have a banana tree in your garden then start right there. By cutting its bark into lengths of say 10 inches, you already have a soft base on which to place the krathong accoutrement – flowers, a candle, and a few incense sticks.

Some people place a few coins as an additional offering. The key is to balance these props well in the middle so that your krathong doesn’t topple when placed in the river.

More elaborate forms of krathong are made from weaving banana leaves into various shapes and forms, but this is best left to the professionals.

Most beaches and hotels will hold their own krathong events where guests and tourists are welcome to take part.

In Patong, TAT Phuket joins forces with Patong Municipality to hold a Loy Krathong event tomorrow that will also include a contest for the best krathong and Miss Noppamas pageant.

Noppamas was a lady of the court in the 18th Century, who was credited with crafting the first krathong. At 5:30pm a large float will start from Sai Kor Road.

The Noppamas pageant will also be held on Karon Beach. In Phuket head to Sapan Hin and Suan Luang Park for similar celebrations.

On The Menu: Very Versace