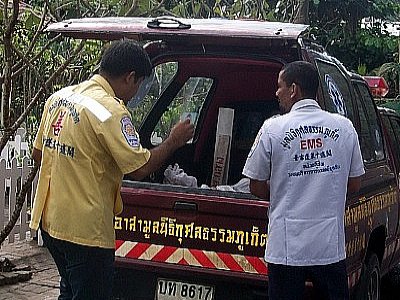 PHUKET: Police suspect unbranded drugs may have contributed to the death of a British tourist whose body was discovered in his resort guest room this morning in Phuket.

The man, a 64-year-old British national, was found dead by his female companion in the couple’s room at a resort at Nai Thon Beach at about 9am, said Capt Prakorp Boonkwan of the Tah Chat Chai Police.

“At the scene, we found several unidentified medicines in the room. We have sent these for testing to determine precisely what the drugs are,” Capt Prakorp said.

The man’s body was found lying on the bed and there were no signs of a struggle in the room, he added.

“The body will be sent to the Institute of Forensic Medicine at Police General Hospital in Bangkok in order to determine the cause of death,” explained Capt Prakorp.

The British man checked in at the resort about three days ago and was joined by an Indonesian woman yesterday.

“They went to have dinner near the beach. Then in the morning, the woman reported to resort staff that the man had died,” said Capt Prakorp.

“We will continue our investigation, but we will have to wait for the test results before we can confirm the cause of death,” he added.

The Gazette has been informed of the man’s name, but it is being withheld pending confirmation that next of kin abroad have been notified.

Live Wire: Drilling down on landlines