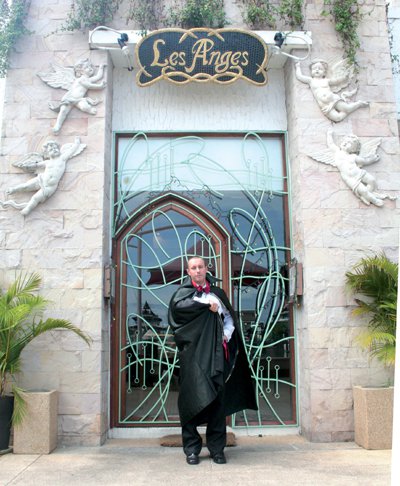 PHUKET: Dressed in a flowing black cape, a certain Mr Snape mingled with the New Year crowds in Patong on New Year’s Eve, but Andrew Snape has no relation to the character in Harry Potter.

Yes, they are both teachers, wear black capes and have English accents. But “Count Snape”, as Andrew calls himself when dressed as a vampire, performs another kind of magic altogether as the crowds witnessed when he made his theatrical entrance onto the stage to deliver the final “Count”- down to 2012.

Count Snape sings opera and the crowds were treated to three songs from his repertoire. Earlier that evening he was at the Friendship Beach Resort where he sang Puccini arias, songs from Leoncavello’s Pagliacci and more popularized Neapolitan Operettas. Imagine an operatic vampire tenor in full regalia singing ballads such as You’re My World, Quando, Quando and ending with Shubert’s Ave Maria and O’ Sole Mio and you get the picture.

Armed with garlic and earplugs, the Phuket Gazette went for an “Interview with a Vampire” and, as it turned out, needed neither as Andrew Snape is an extremely nice chap more partial to a cup of tea than anything bite-sized.

As with all vampires, Andrew puts away his cape before dawn and since August 2011 has a respectable day job as Head of Music and Information Technology at Kajonkietsuska International School.

“The opera is a hobby although in my case it’s a very real passion.Of course I hope one day I can become famous for it. As a teacher I do get many opportunities to use my operatic talents.” said Andrew.

Before coming to Phuket he worked as Head of Music at the Horizon International School in Yangon, Myanmar, where he wrote a successful new syllabus for the whole school. The students there regularly volunteered to perform musical pieces during morning assembly and Andrew gave a farewell performance to the staff and students by performing E Lucevan Le Stelle from Puccini’s Tosca appearing, as he has done on many previous occasions, as Count Snape.

“The great thing about opera is that it reaches out to people. It is a very expressive, spiritual and unique kind of music that can make people feel really inspired when they listen to it. It usually tells a story, either a tragedy or a comedy, which enables people to release from themselves any kind of problems that they are going through in life,” says Andrew.

Andrew has had the name Snape before Harry Potter was even invented. He was born with it in 1976 in a town called Blackpool in the northwest of England and attended Roman Catholic schools where he developed his skills as an actor, singer, pianist and organist. He gained a GCSE and Advanced Level in Drama and Theatre Studies in addition to a Technical Vocational Educational Initiative in Music and graduated with a Bachelor of Arts degree with honours in Sociology and Drama from De Montfort University. In 1998, he completed a TEFL certificate and took up his first teaching post.

A devout catholic, he worked on his piano/organ skills and studied the ancient music of Gregorian Chant as a novice monk at Saint Michael’s Abbey in Farnborough, England, before completing a post graduate certificate in education and obtaining qualified teacher status.

So why the vampire look? “I’ve always been interested in vampires. As a child I used to watch The Little Vampire on TV and then later one of the first books I really enjoyed reading, by the comedian Eric Morcombe, was called Count Alucard which is Dracula spelled backwards. I also played Dracula in a play I wrote for Comic Relief. Given my background in theater and my name, I was already called “Count Snape” by friends and colleagues. The look works well with opera and if you watch the great Luciano Pavarotti’s final performance in Japan on YouTube you will see that he too wears a cape and uses white makeup. I feel it also helps make opera more accessible to younger people, which is one of my goals.” said Andrew. His other goal is to bring opera to Phuket and Thailand and to this end he will perform a free opera at Royal Phuket Marina on Friday, January 20 at 8:30pm. “The sea makes a great backdrop to opera and I’m really looking forward to this performance” said Andrew

His ultimate goal is help make the world a better place through drama and music and we are counting on him to do just that.

In memory of Bjorn TÃ¤ckmann