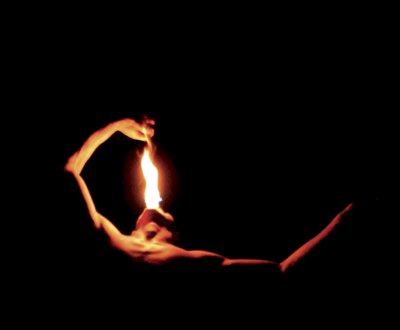 PHUKET: The smell of gasoline lingers on your hands after the flames have been extinguished, and the performance is over. But the smell itself is a little addictive, like a woman’s perfume on the pillow of an empty bed – a reminder of a past flame.

A very talented busker (street performer) once took me aside and gave me a bit of advice, some insight that changed how I constructed my own street show: People don’t want to see you get hurt, but if it happens, they don’t want to miss it.

It was true. No one wanted to see the young American standing on the board walk of The Haag burst into flames, or drop one of the fire clubs he was juggling on the volunteer laying between his legs. But would they want to miss it? Would you?

Rasta bars and beach-side venues of Phuket are riddled with fire performers, some of them quite talented. The island’s fire artists tend to rely on spinning arts, such as staff and poi. Rarely do you see fire juggling, hula-hoop, fans or eating. However, you do see some fire breathing, which always draws impressive cries from the crowd.

Fire performing simply plays on people’s perceptions of what is dangerous.

Surely flames spraying out of a man’s mouth, stretching six meters in a steady burst, must be dangerous.

Even fire breathing, which is by far the most dangerous of the fire arts, isn’t that dangerous.

As with every other instance when you’ve “played with fire”, all you do is take precautions and actually think about what you are doing.

The only time I was ever legitimately caught on fire was when I hadn’t thought about what I was doing all the way through.

The flame was to run up one of my trouser legs, across my crotch (sparkling idea) and back down the other. We did a quick test – no pain when we put a little lighter fluid on my jeans and burned it… The flaw in my logic at that moment is so excruciatingly obvious that I won’t go into details, but I was very glad that there was a fire extinguisher on hand.

I learned fire eating and breathing from a book (setting a person’s pants on fire was not one of the chapters).

The concept for quality fire breathing is simple: aspirate.

“Fire breathing” is a misnomer, it should actually should be called fire aspiration, which is not nearly as sexy a name. Take any flammable liquid, from Bacardi 151 to gasoline, and instead of spitting it at the torch in your hand, you aspirate it.

It’s like playing the trumpet. The liquid is sprayed out in tiny droplets allowing for the right mixture of air, fire and fuel.

Just a handful of safety precautions make such a dangerous stunt incredibly safe.

Perhaps the most important rule is never swallow. Spit it all out and rinse your mouth afterward.

Nipping at the heels of the “never swallow” rule (fire performing specific), is the obvious “never blow a flame into the wind” rule, because God’s lungs are bigger than yours. Such a battle will singe your eyebrows at the very least and in a nastier scenario, after a trip to the hospital, you could easily end up a Voldemort look-alike.

Don’t use gas. Yes, it produces the biggest flames, however 100 per cent pure paraffin is always a better choice, as it is less harmful if you do accidentally swallow a little.

Actually the best thing to do is to learn when you are sober and practice with water – yes I know it isn’t flammable, but it helps a person understand aspiration.

But let’s be honest, fire breathing is a standard “stupid human trick”. I’ve seen drunks stumble onto the beach and give it a go with moderate success (this is by no means an encouragement for trying this). Yes, the more you practice the better you will get, but compared to the other fire arts, fire breathing is for barbarians. So instead of just being razzled by the big flames leaping from a performer’s mouth, like hot air from a car salesman, pay attention to the athletic talent, creativity and showmanship that goes into the fire spinning that can be found on the island.

But no matter what part of a fire performance you enjoy most, from the intricate patterns of a poi master to the dragon bursts of a fire breather, remember, a change in the winds or a sudden gust could land them in the news – and you wouldn’t want to miss that, would you?

Phuket Dining: The other Kiwi juice