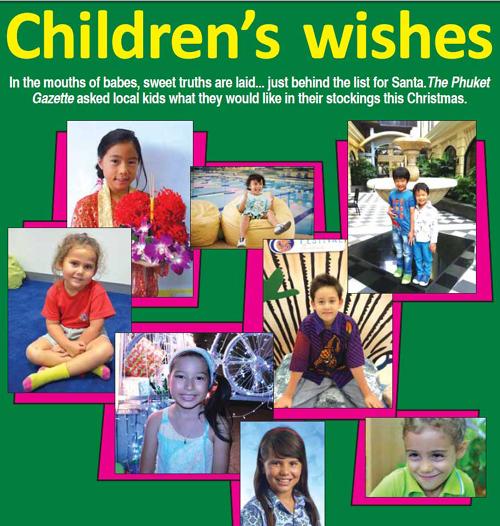 In the mouths of babes, sweet truths are laid… just behind the list for Santa.The Phuket Gazette asked local kids what they would like in their stockings this Christmas.

PHUKET: There are, of course, quite a few iPads on Phuket wish-lists this year, but the Gazette tried hard to convince these choosy children that other brands were equally good and a bit fairer on Mum and Dad’s wallets.

Paul and Mark think it would just be cool to hang out with Santa at the mall.

Olivier was hot for an iPad, but Mum believes Santa might think the Samsung G3 is just as nice.

3-yr-old Sophie, in PIADS kindergarten, has a very specific wish: “I’m going to have Christmas in my house with everyone… and a strawberry smoothie!”

Samantha, 10 from BIS: “I want all the animals in the whole entire world because I love animals sooooo much. The animals that I would like the most are a horse, a dolphin and a hamster. Luckily I already have a cat called Quincey. I would also like a few books because I love reading, and also I want an iPad, but I know that is never going to happen!” Phew!

Allisa wants Santa to make her as fast as Radka Vodickova.

Almost 4, Tyra, who is in the kindergarten class at PIADS, has a very ethereal request of the jolly red-robed present-bringer: “Stars! Stars from the sky. One star.”

Rada, 8, who studies at PIADS wants a doggy doll, because: “lt reminds me about my first doggy doll from Daddy.”

DAVID, at 4 years old, thinks Santa should give him a comfy beanbag factory.