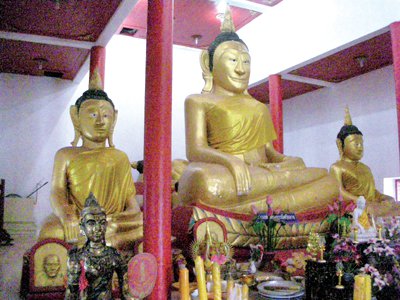 PHUKET: Wat Pranang Sang is the oldest surviving temple on Phuket Island. It has a long and fascinating history, serving as an important center of Buddhism for the townspeople of Thalang for centuries.

When the Burmese invaded the island in 1785, the temple served as a rallying point for Siamese soldiers who gathered to defend the town.

The history of the temple itself is quite muddled. No one really knows how old it is exactly. Legend has it that the temple was built by Pranang Lueat-khao, a name that translates simply as the ‘White Blooded Noble Lady’.

Being a devout Buddhist, her final wish was to be able to travel to Sri Lanka so that she could pay her respects to the relic of the Buddha. Her wish was granted by the ruler.

On her way back from Sri Lanka, the noble lady stopped to build Buddhist temples in different towns along the route, including Thalang town where she built a temple that would later be called Wat Pranang Sang, which means the ‘Temple built by the Noble Lady’.

When she returned to her home city, she was taken to the execution ground. She insisted on her innocence until the final moment of her life. When the executioner’s blade struck her, a stream of white blood flowed from her lifeless body. The miracle, witnessed by hundreds of onlookers, was a sign that the noble lady was indeed innocent and that she had been punished for a crime for which she had been wrongly accused.

The story of Pranang Lueat-khao closely resembled a popular legend from nearby Langkawi Island. Lady Mahsuri, the wife of the prince of Langkawi, was accused of adultery by her jealous mother-in-law when her husband was absent.

Despite her plea of innocence, she was sentenced to death. In this case, too, when she was stabbed, a stream of white blood flowed from the fatal wound. With her dying breath, she cursed the island of Langkawi to seven generations of tribulation and misfortune.

The story of Lady Mahsuri is well known in Phuket as it is believed that after her death her family fled Langkawi and came to Phuket. It is however unclear how her tragic story came to be associated with Wat Pranang Sang. It is unlikely that she ever visited Thalang or built this temple. Mahsuri was Muslim and would not have asked that a Buddhist temple be built in her memory.

Phra Kru Vichit Supakarn, a resident monk at Wat Pranang Sang, said that the temple was built around five centuries ago and was originally called Wat Na Sang, or Wat Takien. According to the monk, historical records about Thalang have credited the renovation of the temple to the ruler of Nakhon-Sri-Thammarat and his wife.

The ruler of Nakhon-Sri-Thammarat was on pilgrimage to Sri Lanka when, on the way, their ship stopped at Thalang. Upon visiting the rundown temple in Thalang, the ruler ordered it to be renovated and renamed Wat Pranang Sang, in honor of his noble wife.

Wat Pranang Sang is now home to one of Phuket’s most important historical artifacts. The temple’s oldest building houses three Buddha images made entirely out of tin. They are the largest tin Buddha images in the world.

According to Phra Kru Vichit, when the Burmese invaded the island in 1785, Wat Pranang Sang was used as a rallying point for soldiers and locals who gathered to defend Thalang.

Because tin was a semi-precious metal at that time, the locals were afraid that what was then known as ‘the Three Kings’ Buddha images would be plundered by Burmese soldiers if the town fell, which then seemed very likely.

The townspeople therefore planned to hide the tin Buddha images from the enemy. They built three large, hollow Buddha images out of cement.

The plan was to hide the three precious Buddha images, the town’s most important treasures, inside the larger cement Buddha. The tin Buddha images were therefore placed in the belly of the larger images and sealed away.

Phra Kru Vichit said that the townspeople also inscribed a coded text on the outside of the cement Buddha to indicate the treasure that was contained within.

In time, the tin Buddha images were forgotten, until one day somebody managed to decode the inscription. Suspecting that there might be something inside the hollow Buddha, they made a small opening in one of the cement images. Sure enough, they found a tin Buddha in the larger Buddha’s abdomen.

The excavators could only remove the heads of the three tin Buddha images from their casing. Attempting to remove the tin images would risk permanently damaging the cement Buddha casings, which are historical artifacts in their own right.

It was decided then that the three original Buddha images would remain inside their casings. Today they are also sometimes referred to as ‘Phra-Nai-Pung’, which literally means the ‘Buddha in the Abdomen’.

Visitors are welcome to pay their respects to what may be one of Phuket’s most mystical and cherished historical artifacts.

Phuket to put its hat on for the Melbourne Cup