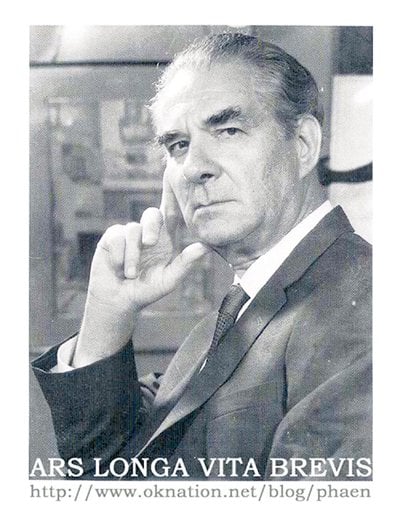 PHUKET: Thai art students and enthusiasts recently celebrated Silpa Bhirasri Day, a Thai holiday, which is designated to commemorate the legacy of the late ‘Father of Modern Thai Art’.

“Life is short … art is longer”, was the motto of Professor Silpa Bhirasri, an Italian sculptor who was born Corrado Feroci in 1892.

Feroci came to Thailand at the age of 31, he went on to found Silpakorn University, Thailand’s first fine art institute.

Silpa laid the foundation of Thai modern art in this country, teaching and pushing more than 2,000 students to become great artists until his death in 1962.

Saturday, September 15, marked the 120th anniversary of his birth.

To celebrate Silpa Bhirasri Day, Silpa’s favorite song “Santa Lucia” was sung, following an ongoing custom, in front of his statue, which stands at the center of Silpakorn University’s Tha Phra campus.

Born to a merchant family in Florence, Italy, the young Feroci showed his artistic inclinations at a very early age.

He graduated from the Royal Art Academy of Florence and taught there from 1914 to 1923.

His life changed dramatically when he was selected by the Italian government, at the request of King Rama VI, to teach Western sculpture at the Fine Arts Department of the Ministry of Palace Affairs.

He was appointed as a sculptor with the Royal Fine Arts Department in 1924 on a three-year contract at a salary of 800 baht a month.

He cooperated with Phra Saroj Ratana Nimman, head of Architecture Department in establishing the School of Fine Arts in 1933 and in 1943 the University of Fine Arts, which became Silpakorn University.

When Italy surrendered to the Allies during World War II, Feroci changed his name and became a Thai national in 1944 to avoid arrest.

Previously estranged from his wife in Italy, he married an Anglo-Thai, or more commonly known today as a Luk Kreung.

Silpa first met Malinee in a boarding house where he lodged in his initial days in Thailand. He later married Malinee, who was born to a British father, Cyril C Kenny, and a Thai mother, Malee Hitasakdi.

Malinee and Silpa lived together until his death in 1962.

Among his sculpted masterpieces are the statues for Kings Rama I, V, VI VII and VIII. Other remarkable works include the King Taksin statue at Wongwien Yai in Thon Buri, the Democracy Monument, the Victory Monument and the Walking Buddha statue in Nakhon Pathom’s Buddhamonthon.

“Silpa Bhirasri Day is Silpakorn alumni’s reunion. It’s our tradition to commemorate our professor who has done so much for Thai art, architecture and archaeology, as well as Buddhism in Thailand,” says Wijit Apichaitkriengkrai, manager of Silpa Bhirasri
Research Center.

Visitors can learn more about Silpa by visiting the Silpa Bhirasri Memorial Gallery. Located in Silpakorn University’s Tha Phra Campus, the gallery was once used as Feroci’s office.

It houses a collection of the professor’s belongings, his masterpieces and masterpieces created by his students. On display are his paintbrushes, sculpting tools, a typewriter, books, his uniform and even his day bed.

Visitors will also have the opportunity to view two rare documentary videos of Silpa working on his masterpieces. One is a home movie that shows Silpa and his student Sithidet Saenghiran creating the huge statue of King Taksin.

On loan from the Thai Film Archive, the black and white documentary is on display along with his sculptures at the “Thai Trends” exhibition at the Bangkok Art and Culture Centre.

The Silpa Bhirasri Research Center is open from Monday to Friday, 9am to 4pm. Admission is free.