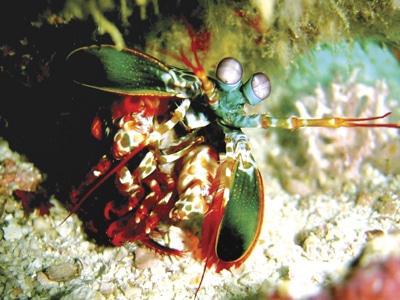 PHUKET: A brilliantly colored mantis shrimp (stomatopoda) pops out of its burrow and scurries towards a broken piece of coral. Its legs spin out below it like the Road Runner – but it’s not that fast, at least its legs aren’t.

We kneel in the sand to watch the biological wonder. It looks almost comical as it arches its head up, prim and proper, with its legs going, going, going and yet so many divers only give this bafflingly gifted creature a cursory glance, before chasing dreams of leopard sharks and manta rays.

Our mantis shrimp, “Harold”, peeks out from his den, his eyes, each set atop a stalk, like a submarine’s periscope.

The beauty of Harold and his brothers, sisters and cousins is that they are common in Phuket waters, yet there is very little that is common about them.

Armed with the fastest limb strike in the world (80kmh), these tiny creatures can hit with the impact of a bullet, enough force to crack the glass on an aquarium or hammer through a mollusk’s shell (click here for YouTube video). In fact, the strike from their raptorial claw is so quick that it creates a tiny air space behind it, which makes a snapping sound as the water collapse around it.

Even if the shrimp misses its target with its claw or hammer (depending on the sub-species), the shock wave from the collapsing bubble can be enough to kill or stun its prey.

To complement the quickest punches in the world, this little invertebrate, also known as a “thumb splitters” for painfully obvious reasons, have the most complex eyes in the animal kingdom. So as we lean in for a better look, we’re also getting eyed up, and pretty hard too.

Here we are blowing bubbles and watching Harold with only three kinds of light receptors in each of our eyes, while Harold is seeing the world in vastly more detail with ten light receptors, allowing him to see into the infrared and ultraviolet range.

What’s more stunning than the simple complexity of a mantis shrimp’s eye, is what’s going on behind it – mantis shrimp are the only invertebrates that can recognize individuals of their own species and remember the outcome of fights against rivals.

In fact, there is a rumor of a diver in Phuket who gained the trust of one such individual, though the diver supposedly lost a fingernail in the process. By bringing a tiny piece of fish to the same thumb splitter every time he dove at a particular site, the diver was able to establish a relationship.

So if a man ever bets you a bottle of top-shelf whiskey that he can get a mantis shrimp to eat out of his bare hand, it’s best to believe him – unless you’re okay scurrying for your wallet.