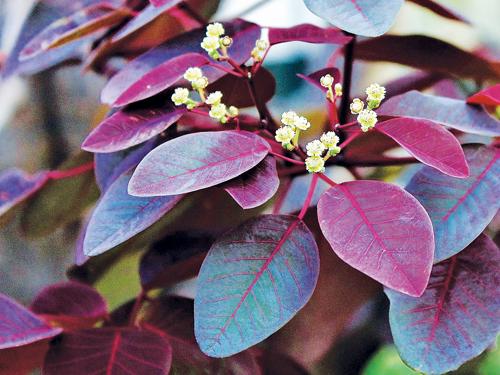 PHUKET: The English language has a wealth of expressions for reticent or modest behavior. “Take a back seat” is one; another, with a biblical provenance, talks of “hiding your light under a bushel”. Brought up as children on AA Milne’s tales, older Phuket Gazette readers may recall Winnie the Pooh saying: “it’s not much of a tail, but I’m sort of attached to it.” Endearing.

Oddly, a number of these expressions for self-effacement use floral metaphors. For example, we may refer to a “blushing or (shrinking) violet”, or “a wallflower”.

The literal source of the violet trope is a small flower related to the pansy.

It grows unobtrusively in secluded, shady and often marshy spots, and hides its small but fragrant blooms behind large heart-shaped leaves. Hence the phrase’s aptness as a description of shy, withdrawn people.

The wallflower survives in taxing conditions in the wild, perched on cracked rocks and old walls. A member of the mustard genus (cheiranthus), it produces clusters of dull bronze or orange flowers. However, the metaphor “wallflower” has a later origin: it was first used by an eighteenth century novelist to refer to sad girls left to fret on the sidelines at ‘posh’ balls. Like the flower, the expression has survived the test of time.

Both these unassuming plants hail from temperate climates. In the tropics, the floral emphasis is more often on bold, even brash colors, on plants such as orchids, chalice vines, allamandas, or brugmansias that say “look at me, aren’t I stunning! I’m not going to be a wallflower.” But even in these hot-house conditions, there are unpretentious species that perform a serviceable job in the garden with the minimum of fuss and attention.

One of the most useful of these shrubs is euphorbia cotonifolia. While it pales in significance alongside its cousins – the crown of thorns, or the showy white sprays of euphorbia leucocephela – it will grow almost anywhere, and even in shady conditions.

Multi-branched from the base, it forms a large bush with its green and lightly purple-mottled or crimson leaves, and reddish stems. Known in Thailand as thon-po-daeng, the name alludes to the color of its foliage, which in the case of some recent cultivars, or when given enough sun, will produce leaves of a brilliant magenta.

That this plant has become naturalized on waste land around Phuket is an indication of its capacity, like the violet and the wallflower, to survive in unhelpful conditions. It will happily co-exist with other trees and shrubs, will plug gaps in your garden, and can be used to accompany other container plants. Three things to note: The flowers, small, round and cream, are pretty but take second place to the foliage.

Moreover, the stems are jointed and therefore quite brittle. And if deprived of water, cotonifolia will wilt. But it invariably recovers, once moisture gets to its roots. And if you do not want to go looking for it around the island’s waste lots, cultivars are available in plant nurseries.

Phyllanthus myrtifolius belongs to the same vast euphorbia family. Another attractive foliage shrub, this one has a low growing habit, and is especially useful for raised beds or planted along the edges of a fish pond, where it will soften or hide the margins of the pool. It has long, slender branches which arch over, and dark, evergreen, fern-like leaflets. These may sprout roots when they come in contact with the ground.

Like cotonifolia, it makes an effective and unobtrusive cover when planted among larger or more vibrant shrubs. And similarly, phyllanthus will tolerate most conditions including poor soil. But it is essentially a sun-lover: this makes it a good choice for a rockery, where it may rub shoulders with cacti, pandanus pygmaeus and tradescanthias.

Tip of the week – Fighting the elements
Being a small tropical island, Phuket has a salty atmosphere, which particularly affects gardens near the sea. Some plants – milkweed, sea lettuce, stilt palms, sea-almond and casuarina trees seem to thrive in such conditions. But most are vulnerable to the combination of gusting winds and saline air.

Trees with tender, lush foliage such as ashokas (polyalthia) or trees with delicate fronds such as bananas are easily damaged: the result – shredded fronds or foliage and in some cases loss of leaves.

I recently visited a mature garden near Karon Beach encircled by tall buildings, which had created a kind of wind tunnel. A long row of ashokas had been planted to form a wind-break – a common choice for this purpose in Thailand – but years of buffeting winds had caused them to lean in one direction and, in the worst affected area, to lose most of their foliage.

Portrait of a modern day backpacker

Relearning the balance of life