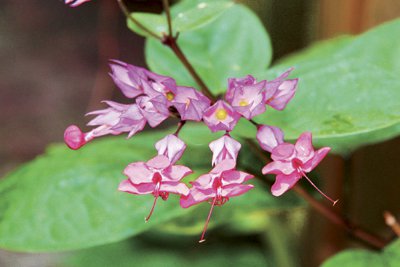 PHUKET: Driving around Phuket today, I was interested to see what plants were being utilized in new developments: as ornamental additions to reception areas, flanking boundary walls, or as borders and hedges.

It makes doleful reading, but it is sadly the case that almost all budget-priced condominiums and shop-houses – and there is a rash of new ones – simply ignore the need for shrubs or trees.

Having removed every vestige of greenery from the site, these developers clearly see no point in planting new trees or, in most cases, even adding a few container plants.

Instead, the front area of each new construction is concreted over, so space can be made for parking. Priority number one.

High-end developers seem to take more account of the natural environment. In some cases, it is admittedly no more than a few token pieces of topiary, a row of wrightia, or a clipped hedge or two of ixora.

In those resorts and commercial projects that genuinely care about their ecological and artistic image, however, the results are gratifying.

Indeed, I was delighted to write recently about the Mövenpick Resort, which not only has graceful columns of palms and star apple trees to greet new arrivals, but acres of lawns, lakes and woodland sporting hundreds of arboreal varieties.

Such first impressions are, of course, very important.The Evason Resort, recently much in the news, has long been a Phuket landmark. As you approach the resort, you travel down a mature avenue of over-arching oil-palms, many festooned from ground to crown with ferns of various kinds. A soothing and relaxing introduction.

In contrast, Siam Niramit, is a new complex, aimed at providing a Thai style “spectacular”. Built in an area of the Bypass Road on which the developers’ gaze has begun to focus, the Niramit is entered past high white walls, already flanked by rows of bamboo, tall, graceful and vividly green.

Bamboo looks great when it is young and healthy: it is, however, a heavy feeder, produces dense root structures and lots of falling leaves. I wonder how it will look in a few years’ time.

Festooned over the walls of the parking area was an unusual climber. The wooly morning glory (argyreia nervosa) is not a common sight in Phuket, but here it was being given a chance to show off its large, pink, trumpet-shaped blooms.

Back in Rawai, a peek at the familiar Friendship Resort revealed the aesthetic benefits of low-rise chalets – a style less favored in nearby developments – and the soothing charms of a green environment where coconut palms and alstonias were much in evidence.

This old/new pattern is repeated elsewhere: the established Rawala complex in Rawai has lots of trees, including a row of white-flowering plumerias along the entire frontage. Just down the road, the newly completed Rawai Palm Beach Resort – a massive affair – continues the theme of palms and plumerias in its impressive entrance area, but lets itself down at the business end, where only a few token potted evergreens, and a solitary mature tree soften the overwhelming impact of concrete.

But wait. Another newish resort is bucking the trend. Admittedly, the Chalong Chalet Resort occupies an enviable position on rising ground with panoramic views. But everything has been done to heighten this natural advantage. The rotunda car park has a mature neem tree (azadirachta) smack in the middle, encircled by a low evergreen hedge.

Such attention to aesthetic and natural detail is everywhere in evidence: pleasant single-storey chalets are set amid acres of terraced and manicured lawns and an imaginative range of trees and shrubs.

And beyond every green vista, the sea, the sea…

Phuket Lifestyle: Paying it forward with a gift that keeps on giving