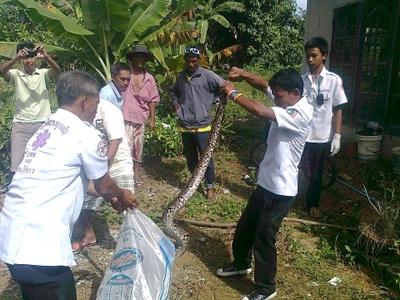 PHUKET: Rescue workers yesterday captured a huge python they believe was slithering to higher ground to avoid floodwaters that affected much of Phuket yesterday.

Phuket Kusoldharm Foundation workers at Baan Kor En, in Mai Khao, were notified of the serpent by nearby villagers, who called for assistance after the legless creature appeared behind an unnumbered rental home in their community.

The workers managed to capture and bag the constrictor, which weighed 12kg and measured 1.5 meters in length. It was later released in a remote, wildlife area.

Kusoldharm staff said they believed that the snake was displaced by floodwaters that had overflowed from a nearby tin mine pond, but added that they could not rule out the possibility that the snake had entered the area in search of prey.

The snake captured was relatively small by the standards of the reticulated python (ngoo leuam in Thai), which are the world’s longest reptiles, typically growing to a full adult size of three to six meters.

They are also excellent swimmers, with sightings reported far out at sea.

Although large specimens are powerful enough to kill a human, attacks are extremely rare and none have ever been reported on the island by the Phuket Gazette.

People who need help with dealing with snakes can contact the Kusoldharm Foundation through the Narinthorn Andaman emergency number 1669.