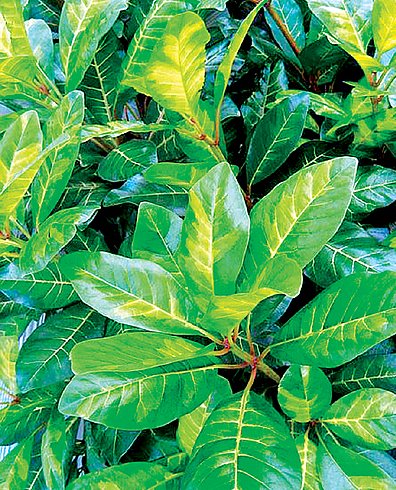 PHUKET: Despite its unfortunate name, pisonia is a most unusual and spectacular plant. It’s unusual because it’s grown as a garden shrub or small tree entirely for its distinctive foliage, which is sometimes a brilliant light green, but often a luminous golden yellow. It’s spectacular because no other shrub has leaves of quite the same hue.

An unlikely member of the bougainvillea family, it occurs widely in tropical regions of the world with most of the species hailing from America. But Pisonia grandis, which can grow into a large tree, is now found on many islands in the Indian and Pacific Oceans where it forms dense thickets.

Perhaps that’s why one variety seems to be so at home here in Phuket. There are magnificent examples dotted around the island, mostly in front yards, especially in the Nai Harn and Rawai areas. These are specimens of Pisonia alba, a cultivar known in Thailand as saeng chan, a shrubby tree which produces the most showy and translucent leaves – hence its popular names of ‘lettuce tree’ or ‘moonlight tree’.

The sticky seeds are relatively insignificant. Although they trap insects, apparently they do not absorb or ingest the creatures, unlike the carnivorous pitcher plant I described last week. Interestingly, these seeds account for its other name of ‘catchbirdtree’, since they supposedly trap birds in their gummy embrace. This may be a fascinating idea, but it’s highly improbable. Anyway, in Phuket at least, it produces very few sticky seeds.

Pisonia alba is a tricky shrub to establish since it requires well-drained, sandy, slightly acidic soil. However, once pisonia gets going, it grows rapidly and soon provides a striking contrast to nearby shrubs.

Because it produces such dense foliage, it’s particularly effective as a verdant screen next to a lawn. It’s readily available here as a container plant in nurseries. It’s best situated in a dryish part of the garden where drainage is good, and where it will get plenty of sun.

It will survive as a container plant, but it tends to get leggy and is happier in the open garden. You can propagate from fresh seeds or cuttings. Variegated forms are now being developed, but pisonia remains a shrub that is more or less ignored in books on gardening. I find this to be a strange omission.

On a side note, the story continues on Lavender – the subject of my last article. You may recall that a reader asked if Lavender could be grown in Phuket, to which my answer was a resounding “no”. Just recently, one of our readers kindly pointed out the fact that Lavender is being grown at the Royal Agricultural Station on Doi Ang Khang in Chiang Mai.

Actually, lavender potpourri is being sold under the Doi Khan brand, and lavender water (eau de toilette) will be marketed soon. Of course, the growing site is higher and much cooler than Phuket. But at least it is being given a run here in Thailand, as many other subtropical plants should be.

After all, you never know until you try.

Phuket gardening tip of the week

Recently we discussed how to create areas of shade in your pristine garden. Trees such as golden cane palms and sturdy evergreen shrubs grow so rapidly they can provide pools of shade quicker than you ever believed possible. My garden, all of three years old, now has more shady than sunny spots.

No problem. The intensity of the Phuket sun is such that none of the tropical plants object to living in partial or filtered shade – what the Italians poetically call chiaroscuro. So out and out sun-seekers, including the popular ixoras, cacti, euphorbias, durantas, acalyphas, adeniums, and allamandas, will do equally well in semi-shade, so long as their root systems are in well-drained soil.

On the other hand, all of those rainforest understory plants, such as bromeliads, aglaonemas, dieffenbachias, philodendrons, anthuriums and indeed most twining climbers, will appreciate the newly secluded parts of the garden.