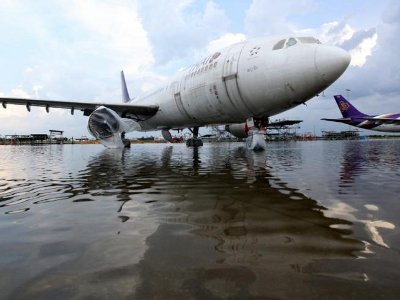 PHUKET: Flood waters have inundated the runway at Don Mueang Airport in Bangkok, forcing Nok Air to cancel all flights between Phuket and the Thai capital until at least October 31.

The immediate cancellation is only temporary, said Prathuang Sornkham, who returned to his position of director at Phuket International Airport about a week ago.

“However, if the water does not recede, the flights will remain cancelled until the situation returns to normal,” Director Pratuang said.

The runway at Don Mueang being flooded would not affect other flight services between Bangkok and Phuket, he added.

“We have not been informed of any other airlines cancelling flights because the three airlines – Bangkok Airways, Air Asia and Thai Airways – all fly from Suvarnabhumi International Airport,” Mr Pratuang said.

However, he did not clarify whether or not Nok Air would try to resume flights to and from Phuket via Suvarnabhumi Airport.

Meanwhile, Orient Thai Airlines, which also operates flights to Phuket from Don Mueang Airport, states on its website that it has moved operations to Suvarnabhumi Airport.

“Passengers can check-in at Row D, Level 4 at the Departure Hall,” says the notice on Orient Thai’s website.

According to the latest flight schedule posted, flight times for all Orient Thai flights to and from Phuket remain unchanged.

Mr Prathuang’s return to duty at Phuket Airport follows an Airports of Thailand (AoT) disciplinary investigation regarding a group of South American passengers who flew out of Phuket without passports.

During the investigation, Wing Commander Prathuang was transferred to Bangkok and became a “Senior Specialist 10” AoT executive.