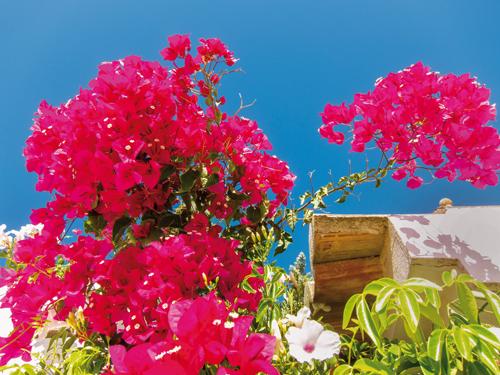 PHUKET: Well not all bloomin’ beauties. Take bamboo or bambusa for example, it does produce a blossom; after all, flowers are a necessary prelude to the more important business of procreation by seed dispersal.

However, bamboo isn’t cultivated for its flowers, but for entirely different reasons. It is grown to create the ramrod-straight canes used commercially in scaffolding, or for lightweight furniture and salas. But for gardeners, it is prized as a verdurous screen, due to its propensity for rapidly creating erect barriers with its distinctive vivid green foliage.

If you aspire to be a bamboo man, choose a small variety and plant the canes well apart; they will spread rapidly and develop huge, tangled root systems which will deter any other plants from establishing themselves in the vicinity.

Dendrocalamus giganteus is the monster; smaller varieties include white bamboo grass which is variegated and nitida with black canes. Ventricosa or Buddha’s belly has a knobbly, almost beaded stem.

Almost as quintessentially tropical is the bougainvillea spectabilis. Another ever-present in Phuket’s gardens, it is chalk to bamboo’s cheese. For a start it is not cherished for its foliage, but solely for its array of brilliantly colored, papery bracts. Hybrids now include almost all the colors of the rainbow, though the dominant hues are still salmon pink, orange red, magenta and white.

Gardeners, however, should beware that bougainvilleas are extremely thorny – I have had spikes go right through sturdy rubber soles – and, once established, the shrub grows at a furious pace, climbing and hanging on by those same curved spines.

Bougainvilleas prefer full sun and dry soil: reveling in rainless heat-waves, they can be left to fend for themselves. Indeed, most potted specimens sulk from being over-watered, and may refuse to bloom. Hard pruning promotes bushy growth and more flowers.

My predecessor as gardening correspondent for the Phuket Gazette was a gentlemen whose punning ‘nom de plume’ was ‘Blooming Bert’. Yet another ‘B’ word. The first piece I read by him was about the dwarf bauhinia. It must have been persuasive: it inspired me to go out and buy one.

However, it struggled in my new garden, and I soon realized that a better variety was probably the one most often seen in Phuket, B. variegata, which though inclined to grow as a many stemmed shrub, will, with suitable pruning, form a small tree with an open crown.

Most bauhinias have distinctive, deeply lobed, heart-shaped leaves, but their crowning glory is the wonderful show of purple, orchid-like flowers which may be two to three inches across. As a member of the fabaceae family, such riches are followed by messy looking beans. Chop them off to encourage future growth.

The Hong Kong orchid tree (B. blakeana) is another suitable subject for treatment. The foliage is gray-green and the blooms can vary from purple through maroon to pink on the same tree. Both varieties are semi-deciduous, but this propensity will allow smaller shrubs to flourish in their dappled shade. A popular roadside tree, they can be seen decorating the road from Karon to Patong.

Other, less frequently grown bauhinias are climbers. B. kockiana has very different, conventionally petaled orange flowers which are produced in clusters. Hailing from the Malaysian rain forest, it needs shade for its roots and plenty of water. In common with so many tendril-less vines, it will need the support of a stout tree or trellis to realize its full potential.

Buddleia paniculata can’t compete with bougainvilleas or bauhinias in this particular beauty contest. Unlike the temperate ‘butterfly bush’ with its spectacular deep purple or lilac racemes, this tropical variety has fairly insignificant spikes of white flowers. The fragrance generated by these flowers is sweet and heady, especially in the evening and butterflies will arrive in fluttering droves.

Tip of the week – Plumerias

Plumerias used to be called frangipanis; in Thailand the name was changed from lan-tom to leelawadee. But there was more than a mere change of designation.

While the number of cultivars has been vastly increased, botanists have reduced the number of original species. Most plumerias are now considered to be derived from P. obtuse or P. rubra.

My local spa has a fine collection of both; mature trees about four meters tall and currently in full leaf and bloom. The species differences are interesting. Obtusa – found in Muslim cemeteries and Buddhist temples – has large clusters of fragrant, white, five-petaled blooms, and glossy, oblong leaves which are rounded at the ends; rubra has ‘rainbow’ flowers, mostly suffused with bright pink and yellow.

Rubra’s light green, oval leaves are symmetrical and pointed, with a matte texture. Obtusa is hardier and less prone to rust and leaf drop, but both spa incumbents are in great shape.

This article appears in the current (June 1-7, 2013) issue of the hard-copy Phuket Gazette newspaper, now on sale at newsstands throughout the island. Digital subscribers may download the full newspaper, this week and every week, by clicking here.