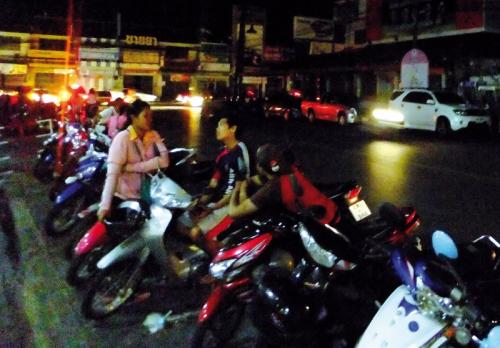 PHUKET: The island’s streets, along with those in the other 13 Southern provinces, were plunged into darkness for a couple of hours on the evening of May 21, due to the Kingdom’s biggest power outage in three decades (story here)

The blackout sparked Thai netizens into a conspiracy theory frenzy, with rumors of everything from a terrorist attack to a lightning strike causing the loss of power. But whatever caused it, the darkness that enveloped Phuket for a couple of hours brought some people closer together.

A man in a checked shirt, who could have been an off-duty policeman – though it would be nice to think he was merely a helpful citizen – controlled traffic with a torch at the Tesco junction traffic lights on the bypass road.

In Phuket Town, passers-by caught a glimpse of families huddled around candles as doors to shop houses were flung open to allow the cool night breeze to enter; restaurants that had generators were packed to breaking point, and families, friends and neighbors no longer stared at the TV screen, but engaged each other in conversation. The blackout gave Phuket Town an eerie community feel.

But admittedly, not everyone would have enjoyed spending a couple of hours in darkness. The roads were unsafe and some business leaders have demanded compensation from authorities for losses due to the massive shutdown of sales, but key facilities like the airport and hospitals were not affected as they have their own emergency power generators.

Life on Phuket returned to normal once the juice came back on and conversation by candlelight was replaced by families crowding round the TV to find out exactly what had happened. The sound of conversation in the air was replaced by the din of the TV and the beeping of smart phones and tablets.

When asked about the effect of the blackout, the local tourist association said, “The impact on everyone, especially the business sector, was big. Two hours for life to stop was too long.”

But the blackout did not cause life to stop; it gave the island a heart.