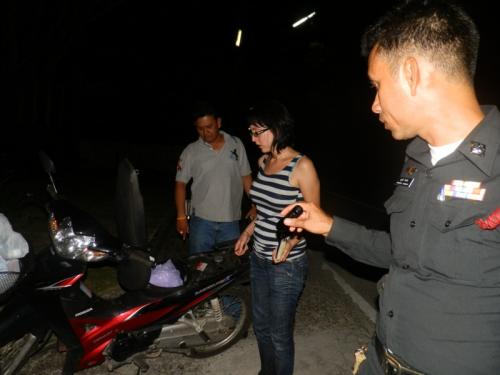 PHUKET: Police barely have their shoe in the door for a case against a pair of snatch thieves after a botched attempt to grab an Irish woman’s purse led to a motorbike crash and a lost flip flop.

Hannah Louise O’Hagan, 27, was driving a motorbike to her boyfriend’s place at Baan Term Fun Housing Estate yesterday evening after a trip to Tesco Lotus when two men on a motorbike started following her, said Preecha Rakjan of the Thalang Police.

The two men pulled up next to Ms O’Hagan and attempted to rip her bag from her shoulder – the Irish woman fought back, causing the bikes to collide and sending all three of them to the ground.

“One of the thieves, as well as Ms O’Hagan, lost a flip flop during the accident. When the two men stood up to escape toward Baan Bang Jo, one of them accidentally grabbed Ms O’Hagan’s slipper, leaving behind his own,” Lt Preecha said.

“When we arrived at the scene at 8:30pm she was standing next to her motorbike looking very pale,” Lt Preecha said.

At the scene police found Ms O’Hagan’s brown leather bag, two unmatched flip flops and a crowd of local residents attempting to assist the Irish woman in contacting her boyfriend.

“I didn’t have a chance to see their faces, because they came from behind me and it was too dark, everything happened too fast. I was shocked,” Ms O’Hagan told police.

With no CCTV footage of the incident and no witnesses, police are stuck with finding a foot that matches the flop flop of the “Cinderella” snatch thief.

“Even though the two men did not get away with the crime, they did attempt the robbery. We will find them and charge them with attempted robbery at night while using a motorbike. However, at this stage we only have the shoe as evidence,” Lt Preecha said.