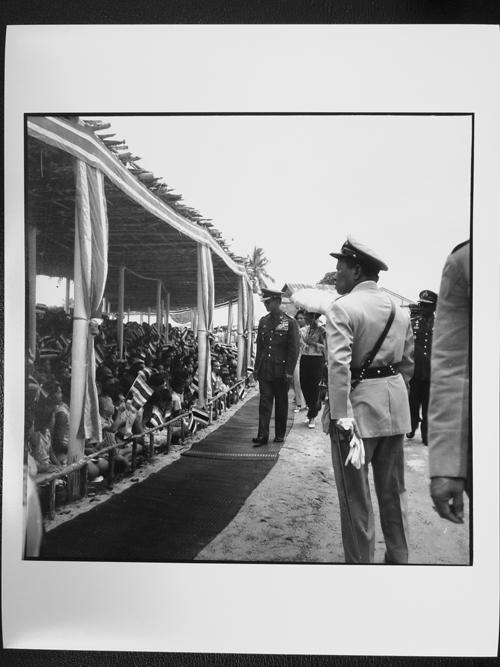 PHUKET: Members of the Phuket Darkroom Club (PDC) will have their first exhibition of black and white photography at the Chalermraja Cultural Centre, Phuket Town from May 1-14. The works on display are portraits of heritage and culture that capture the love Phuketians have for their home, through the lens of a black and white camera.

Audiences will enjoy rare beauties and the charms of more than 50 selective and refined works from PDC members.

Among the displays are old and rare photos of Phuket taken by admiring local photographers. Some of these pictures have not yet been published anywhere else before. Photos include their majesties the King and Queen visiting Phuket in 1959, aerial views of the island, slice of life portraits, historic architecture and old tin mining photos.

All of the featured photos have been made using an authentic darkroom process, which is hard to find in the modern era. Participants will have the opportunity to see brilliant black and white film photos from masters who have honed their craft and refined their works exclusively to join the event.

The Phuket Darkroom Club was founded in March 2012 by a small but devoted group of black and white film photography enthusiasts, who use a small darkroom in the back office of Rijira’s kitchen supplier as a rendezvous point for members’ gatherings. There they exchange experiences and passions about the monochrome world, and sometimes carry on conversations late into the night in the tiny darkroom, while developing and exposing film.

The club was unofficially started in Phuket back in 2010 by two gentlemen who share a passion for black and white photography – Kettepon Rijiranuwat (Sak) and Achitrawit Churmung (Loong). The two men shared a dream of building a top quality darkroom in Phuket, which could be used for black and white film and print development, to enjoy as a hobby.

It wouldn’t be a perfect picture for the PDC until Jose joined. Jose Louise Gay, a former Spanish consular official in Phuket shared the same passion. He had crossed paths with Sak and Loong during his years of service and they became good friends. Jose bought a small shop-house in Soi Soon-Uthis and converted it into his residence, using part of the space to store a sizeable archive of glass plate negatives he purchased at auction from Liang-Eiw studio, before it was shut down several years ago. With the patronage of Jose, a corner of his shop-house was given to Sak and Loong to build their first darkroom and to fulfill their dreams. When Jose relocated to New Zealand a year later, the darkroom moved to a new home, which is attached to Rijira’s office nowadays.

In March 2012, a third member, Prapas Kianpotiramared AKA ‘Tard’ joined the group and they decided to officially form the PDC. They use Facebook as a channel for communicating with members and regularly post quotes from famous black and white film photographers, useful techniques, tips and photos shot by members. The club has also conducted a basic black and white film photography course after which more members joined the group.

To date, PDC has more than a dozen active members in Phuket who meet regularly to go out on photo shoots and return to the PDC office to develop film and make prints. Several black and white photography courses were organized for members over the past year to explore black and white film photography and darkroom knowledge. The PDC currently has more than 200 friends and members on Facebook and numbers are increasing.