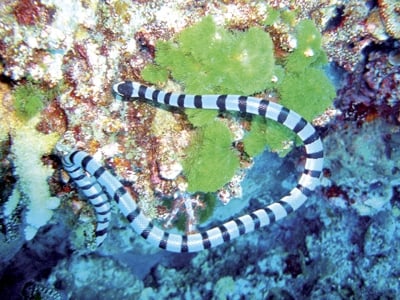 PHUKET: Not every dive in Phuket’s waters, but often enough, a diver comes across a critter that they become inexplicably and completely fascinated with.

The vast majority of dive instructors and masters seem to have their own sea-animal fetishes – from blue dragons to mantis shrimps. They’re usually obscure choices that lean away from charismatic mega-fauna like sharks and mantas (not saying anyone’s turning down the chance to book an entire dive with a manta ray), and are based more on an in-depth understanding of the animal. I know people who claim to be completely satisfied watching a mantis shrimp for the entirety of a 55-minute dive.

A diver surfaces, the regulator comes out of their mouth and immediately they say, “That was cool!”

It could have been a pair of boxing shrimp out and active, or a horseshoe crab scuttling along, for me, on my last dive, it was a banded sea krait (click here to see an Olive sea snake).

The fascination is unexplainable. Occasionally, it’s the first time you’ve seen the animal up close, but more often than not you’ve seen the critter several times over, and this time it was flint and steel for your imagination.

Even before you hit the showers, the computer’s fan is humming and seven or eight websites about the animal are tabbed in your browser. It’s not until you start reading that you truly appreciate how miraculous the creature you just saw is.

I watch the banded sea snake (Laticauda colubrina), also known as a colubrine sea krait or yellow-lipped sea krait, swim below me and close to the corals with a goatfish following close behind. The banded sea snake is known for it’s cooperative hunting technique, during which it will often flush small fish, eels and other pray into the open.

One of 62 species of identified sea snakes, known as Hydrophiinae – literally water serpent, the banded sea snake glides through the water, it’s slightly flattened tail propelling it forward as its forked tongue barely comes out of its mouth to smell the water for prey.

I wanted to turn around, drop close to the corals and swim against the weak current so as to follow it while it was hunting. My plan, with a bit of luck, was to see it head for the surface for a breath of fresh air.

With the capacity to stay submerged for several hours, sea snakes are the sort of free diver you are jealous of. Not only have they developed large lungs that extend almost the entire length of their body (rear portion developed to aid in buoyancy rather than to exchange gas), many species of Hydrophiinae are able to respire through their skin. Some, such as the black-and-yellow sea snake, have demonstrated the ability to satisfy about 25 per cent of their oxygen requirements in this way.

During a diver’s above-water research, youtube inevitably gets involved, despite one’s intentions for maintaining a purely academic fascination with the marine animal.

After closing another great dive with Andrea Filippozzi from Sea Bees and firing up the laptop, it didn’t take long to uncover some unfortunate youtube videos of divers holding this docile but venomous snake by the tail.

Instead of turning on them and striking, as I imagined I might do in a similar situation, the snake patiently attempted to keep swimming for almost the entirety of the three minute video.

All species of Hydrophiinae are incredibly venomous, and yet they are often handled, as seen in the video, without incident.

Nonetheless, pick on the wrong sea snake, such as a hook-nosed sea snake or a Belcher’s sea snake, and you are now messing with two of the most venomous snakes in the world.

A lethal dose of venom, (where 50 per cent of subjects will die), is .02 milligrams of venom to the kilogram of a subject’s body weight. These snakes, when provoked, are not playing.

Despite the potency of the snake’s venom, they are not considered dangerous to
humans.

Only about 25 per cent of the time does the snake inject venom when it bites a human, and even the US Navy, (not known to rate threats lightly), describes sea snakes as generally mild-tempered. Although they do note that there are variations among species and individuals.

But back to the banded sea snake, a member of the Laticauda genus. This genus is unique to the subfamily of sea snakes in that its members are the least adapted to sea life, and unlike the majority of sea snakes, it can still live on land.

The vast majority of other sea snakes are documented as being almost completely helpless on land, unable to move properly or accurately defend themselves. However, the banded sea snake’s body is only slightly laterally compressed compared to other sea snakes, which is one of the factors that allows it to function both in water and on land.

When it comes to the natural world, understanding is 70 per cent of what blows your mind. The beauty of an underwater soft-coral vista, the miles of blue ocean and the tumbling dance of a juvenile rock moving wrasse. But sometimes, a deeper understanding of the world just beyond your regulator bubbles trumps the beauty of ignorance.

Phuket Fashion – From dawn till dusk