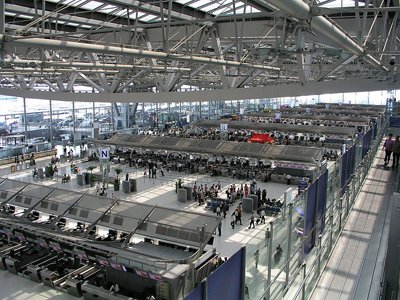 After inspecting the problem-plagued Bangkok airport, PM Yingluck said a committee would be formed to follow up on immediate and long-range plans to ease the crowding, shorten delays and also to expand aircraft and passenger capacity.

Thailand should prepare a plan to strengthen competitiveness to serve the growing influx of visitors, she said.

Under the second phase of the Airports of Thailand’s master plan, the construction of a second passenger terminal should be completed within 70 months or before 2017, while a third runway will be added to smooth increasing air traffic in the future.

Suvarnabhumi Airport can handle only 55 flights per hour compared with its rated capacity of 76 flights because the western runway can by used for only 20 per cent of the total flights. The eastern runway, which is the main landing strip, is now being repaired. However, the repaired area was expected to be half-ready for flight operations this evening, and fully serviceable by the end of this month.

Transport Minister Charupong Ruangsuwan said the prime minister had expressed concern about the limited capacity of the airport and urged agencies to solve the problem. The airport was designed to serve 52 million visitors per year but now the figure has reached 54 million.

Yingluck also instructed all parties to check flight times and airline routes to see if more flights could be squeezed in. “The flights are quite full now. We have to inform passengers in advance and learn from our problems to prepare plans,” she said.

Agencies should accelerate the repair of Suvarnabhumi and prepare Don Mueang Airport as the second international gateway, the PM said.

Thailand should look beyond inbound and outbound tourists and focus on attracting visitors to its airports at major tourist destinations such as Phuket, which is already over-stretched, she added.

Between January and June, some 1,124,234 Chinese tourists visited the kingdom, up 28.9 per cent from the same period last year, the Tourism Authority of Thailand (TAT) said.

Altogether some 10.5 million tourists visited during the first half of 2012, up 7.6 per cent year-on-year.

“The most important contributor to this growth was arrivals from China which, for the first time, exceeded the 1 million arrivals mark in the six-month period,” TAT said.

Tourists from neighboring Malaysia have traditionally been Thailand’s leading market. However, Malaysian arrivals were down 8.5 per cent in the first six months of the year at 1,115,721.

PHUKET: The Tourism Authority of Thailand says it is already working hard to see that the country achieves a tourism-revenue target of 1.416 trillion baht next year, even while facing risks from worsening financial crises in Europe and political uncertainty at home.

Of that total, 450bn would come from domestic tourism and the remaining 966bn from international arrivals. To achieve the target, TAT says it will focus more on revenue-based tourism than on the number of travelers.

By 2015, the TAT expects tourism revenue to reach 2 trillion baht.

Next year, the number of domestic trips is expected to increase by about 3 per cent to 107.4 million, while international arrivals is hoped to rise by 13 per cent to 22 million. To accomplish this, niche tourism such as weddings and honeymoons, golfing, and the medical market will be promoted, while secondary cities will be introduced to attract first-time travelers.

This year, the TAT expects the number of foreign tourists to reach 20.5 million, dropping 846bn into the Thai economy.

Surphon Svetaserani, TAT’s governor, said that next year the agency would be in high gear to promote tourism with flexible plans to deal with possible risks such as financial crisis in Europe, national political uncertainty, and preparation for regional integration under the Asean Economic Community.

Since March, the TAT has mapped out its promotional measures for next year. Its marketing plan will be in line with tourists’ changing preferences. Also, it will offer innovative tourism products to differentiate Thailand from rival neighboring nations, the agency says.