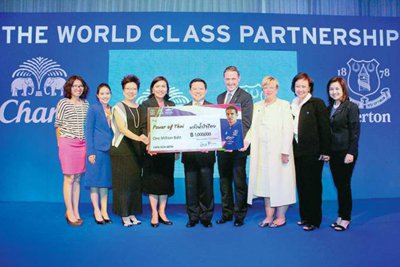 PHUKET: The Thai Premier League could one day become as successful as the English Premier League (EPL), but the country has to be patient, Everton’s chief executive officer Robert Elstone said on Monday.

“If you have proper planning, patience, the right people and the right resources, then why not?” he said during a dinner talk in Bangkok organised by ThaiBev, the makers of Chang Beer, who are also Everton FC’s shirt sponsors.

Elstone, visiting as part of the partnership with ThaiBev, suggested that Thai youngsters should begin their football training at the age of four or five, as beginning at 14 or 15 is too late.

“Thai football should not be ‘afraid’ of becoming successful. You should be setting a lot of benchmarks. The most important thing is to catch the boys at a young age and have patience in waiting for their success. I think it will take at least 10 years,” he said.

The Everton boss also delivered a talk on “Football Freakonomics” and shared his experience at the helm of a top-class club in the EPL, which he hopes can help the development of Thai football clubs.

He said the EPL made an enormous amount of money and had increased its value “like crazy” – a success story that was achieved in just 20 years.

“The EPL brings in £60 million every single Saturday afternoon. This is a phenomenal number… 1,300 per cent more than it was when the EPL was first formed in 1992. The business has grown 13-fold in 20 years. It is the most important barometer to measure its success,” he said.

ThaiBev CEO Thapana Sirivadhanabhakdi agreed that the figures Elstone reeled off showed the value of the EPL contribution to the economy. Nobody thought football could generate 3 billion baht over just one Saturday, he said.

“Over the past two years, I think the Thai Premier League has grown faster than the EPL. All I wish is for Chang to have an opportunity to play a vital role in developing Thai football. I want to see Thai football make good progress,” Thapana said.

Chang became the first Thai brand to support an English football club with its shirt sponsorship of Everton. The partnership, which started in 2004 and is now in its ninth season, represents one of the longest in English football history.

“A partner like Everton, a top-class club, is crucial in the development of our footballers’ skills at the youth, club or national level. The Chang-Everton partnership is vital for achieving our goal,” Thapana said.

Meanwhile, there is a possibility that the two partners may revive the “Chang Thai to Everton” project soon.

“We have talked with Chang about the possibility of reviving the project to send young Thais to Everton. In that project, we helped young rising stars [Teerathep Vinothai, Sompong Sorleb, et al] of the Thai national team train at Everton. Outstanding young players from the Chang Cadet Cup competition held in October will be selected for training at our Finch Farm Academy,” Elstone said.

Elstone also presented ThaiBev with Bt1 million in funds for flood relief raised from joint Chang-Everton initiatives under the “Power of Thai” project. The money was raised during the Everton-Norwich City match last year.

The country is fielding 37 athletes in 19 disciplines in the world’s biggest sporting event, from July 27 and August 12 in the English capital, including Phuket badminton star Maneepong Jongjit in the men’s doubles..

Since Somluck’s groundbreaking success at the Atlanta 1996 Olympics, Thailand have won at least one gold medal in subsequent editions of the Games. However, some fear that the Thai team may return home empty-handed this time, with no standout medal prospect in the roster.

Thailand are in a transition phase in many sports including boxing and weightlifting, the two disciplines in which the country has a good record. Flyweight Somjit Jongjohor and weightlifter Prapawadee Jaroenrattanatarakoon will not defend the Olympic titles they won in Beijing four years ago as the former has retired, while the latter was surprisingly axed from the team.

However, Somluck, along with 2004 Olympic weightlifting champion Pawina Thongsuk and Buttree Puedpong, who clinched the silver medal in Beijing in taekwondo, expressed confidence in the current team at an event hosted by Thailand Post yesterday, where the public were encouraged to give support to athletes through postcards.

In boxing, the Thai squad of three fighters, Sailom Ardee, Kaew Pongprayoon and Chatchai Butdee, have limited experience winning titles in the SEA Games, but Somluck believes the trio has what it takes to succeed in London.

“If you are able to book a berth in the Games, it shows that you are a good fighter. But if they are to succeed, they have to sacrifice a lot of things and train hard to improve their skills. I believe the efforts they put in will not be in vain. If I could win the gold, why can’t they?”

Somluck, whose famous phrase was “I’m not boasting”, believes mental attitude is an important factor in tournaments like the Olympic Games.

“Back then, people thought I was exaggerating when I said I would win the gold. But I just said it because I was really confident of my ability.

“So, I want the three boxers to have the same mindset and believe in themselves. Self-belief decides the outcome, particularly in top-level boxing. When you step into the ring, you must not fear anyone,” said the 39-year-old.

Many pundits believe that taekwondo is the country’s best hope for a medal at the Games, and 22-year-old Buttree echoes that sentiment. She is backing the Thai squad of three exponents, Rangsiya Nisaysom, Pen-ek Karaket and Chanatip Sornkham, to win the country’s first Olympic gold in the Korean martial art.

“I think they all have an equal chance to win the gold as each is a highly capable athlete. I can’t say who has the best chance because it all depends on the draw and how they perform on the competition day.

“For me, everything clicked on that day and I still can’t believe that I made it to the final in the Olympics. I hope one – or all of them, if possible – can go one better than me this time and taste Olympic glory,” said Buttree, who lost to the favourite Wu Jingyu of China in the women’s 49kg category.

Despite the country’s relatively inexperienced squad in the weightlifting competition, Pawina, who became the first Thai woman to win Olympic gold, in Athens – where Udomporn Polsak also took gold – was optimistic that they would clinch at least one medal.

“The athletes have been training well for months, so they have a decent chance of coming home with a medal, if not a gold. There is not much difference in the statistics between our athletes and the Chinese, who are our main opponents.”