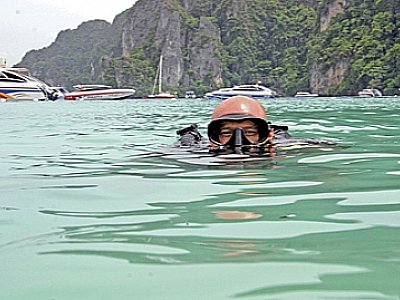 PHUKET: When was the last time something truly fresh hit the dive market? Yes, every year we get niftier regulators, more swanky dive watches and new fin designs that we can’t resist at least window-shopping for. But, when was the last time something was put on the market for recreational divers that really parted the waters – changed the way we thought about diving?

In an activity that is becoming more and more relaxing and accessible to the general public, those wanting to “push the limits” without doing the heavy lifting of tech-diving books, have found themselves at a loss.

Those of us with full time, non-dive industry jobs still want that sense of discovery; to end up in the footnotes of a history book; or, at the very least, to be more than 50 minutes down on a dive trying.

But, this isn’t tech diving.

Kevin Black from Kiwidivers in Chalong, one of only four recreational rebreather dive instructors currently in Thailand, explained that PADI was bringing the “Wow” factor back to scuba diving. The new certifications let recreational divers safely push the boundaries of what they consider sports diving.

The only closed-circuit rebreather currently available on the recreational market is Poseidon’s MKVI. This is one of those bits of gear that guys piecing together their tech kits in their garage years ago would have dreamed of, and now it’s here, safe and actually designed for sports divers.

Before sitting down with Kevin, my understanding of rebreathers was fairly simple – they don’t make bubbles.

Well, I wasn’t wrong, but I was missing just a little bit of the point too. Yes, they don’t make bubbles as the air you breath out is cycled and scrubbed through a closed system, and then has pure oxygen from one of the two tanks in the kit automatically blended with the oxygen-depleted air, making it good for another breathe, time and time again. Sounds complicated, but I was assured that they were dummy proof – so I wouldn’t have any issues.

However, by focusing only on not blowing bubbles and disturbing the fish, I missed the point. Rebreathers don’t just add a couple more minutes to your dive, as I thought. They don’t just double your dive time. They actually can turn a one hour dive into a three hour dive, Kevin explained.

That means, you are the first to jump, and then after everyone has come up, had lunch, geared up and booked a second dive, you are the last to come up – and still don’t have decompression time, unlike a tech-diver.

For many of the 30 to 40 divers on Phi Phi who attended the event, this was their first time strapping a tank under each arm for the sidemount configuration and feeling the new diving “flow”. Sidemount configurations have been around for a long time, first reportedly being used in England for cave diving, and subsequently used all over the world for cave diving and penetration dives.

The weightlessness and balance that sidemount divers gloat about is enough to make me sign up for the course, just to join the club. And the redundant gas supply and reduced lower back strain are both advantages that I’m looking forward to.

Though the course is geared toward recreational diving, it also provides a nice view of the tech-diving world. It’s a little step that leaves you totally comfortable when you start shooting for your ultimate goals, from exploring cave systems to just feeling like you’re part of the ecosystem when you hover above the corals and snap a stellar photo.

PADI has, since time immemorial, preached (and perhaps rightly so) that divers should never dive without a buddy. Though that philosophy has not changed, PADI is now willing to admit that it does happen, either intentionally or unintentionally. And let’s be honest: who is a dive instructor relying on in an emergency when they are taking two “Discover Scuba” divers on their first dip into the big blue?

PADI’s position is clear in their released statement: “Diving without a Dive Buddy, by choice, while not advocated, is something which PADI recognizes to be occasionally either necessary or preferred by some divers.”

This recognition is in many ways a new frontier for experienced recreational divers (100 plus dives is necessary to take the course). Those who have only been loosely following the buddy system, or ignoring it completely while taking photographs, spear fishing or lobster hunting, can come out of the closet.

Not only can they now stop hiding in some murky underground social circle, but they have the opportunity to be trained in “self rescue”, to be tested so that they can at least engage in a more risky activity in the safest possible way.

“One of the key things you learn is how to deal with running out of air when you don’t have a buddy to rely on. You also learn a lot about calculating just how much air you use in different circumstances, and how to plan dives around your estimated consumption,” Kevin explained to me.

Yes, I’m stoked about this and over the next several months plan on taking the opportunity to check out these courses, log some stunning dives and shoot for the foot notes of someone else’s history book.

This is part one of a four-part series on PADI’s new specialty diving certifications.

Phuket Culture: Getting ready for the rains retreat

Phuket People: Raise a toast to a coffee roast