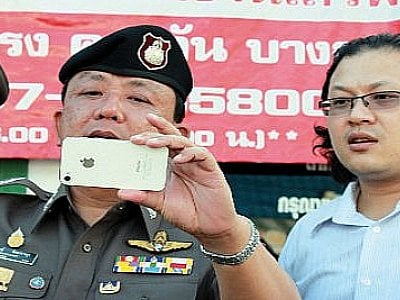 PHUKET: In the wake of several high-profile violent crimes that have rocked Phuket over the past few months, Phuket Police are moving ahead with their plan to set up “safety zones” in key tourist areas, starting with Patong.

Phuket Provincial Police Commander Chonasit Wattanavrangkul delivered the news to more than 800 people from different walks of life in Patong, all gathered at the Phuket Graceland Resort & Spa on July 21. Among those present were representatives from taxi groups, hotel businesses, jet-ski operators and beach umbrella operators.

Joining Maj Gen Chonasit in announcing the plan were Patong Mayor Pian Keesin and the superintendents from every police station in Phuket.

“We are setting up a safety zone in Patong first, and then in Kata-Karon,” Gen Chonasit said, describing safety zones as “zero crime areas”.

The general also laid out his six-point plan in the fight against street crime: “To ensure tourists are confident they are safe in Phuket, we will: 1) set safety zones; 2) be stricter in law enforcement; 3) have more police checkpoints; 4) have more police patrols; 5) use new technology; and 6) work with local people to prevent crimes from happening,” he explained.

A total of 100 officers from the Patong Police, Tourist Police, Marine Police and Patong Municipality will patrol the streets and man checkpoints set up throughout the Safety Zone, Gen Chonasit said.

Twelve officers will patrol six small zones each shift, meaning that at any time of the day officers will be able to respond to any incident in their patrol area within minutes, he added.

Separate teams of officers will also patrol the three main roads into Patong: from Patong Temple to the Chinese Shrine atop Patong Hill; from the Laem Petch Circle to the Thavorn Beach Villa & Spa in Kalim; and Sirirat Road, leading to Karon, further south.

Checkpoints will be set up in front of Wat Suwankiriwong (Patong Temple), Kalim Junction (Laem Petch Circle) and at the four-way intersection at Sirirat Road.

“Police will also regularly patrol areas where troublemakers, such as youth gangs and known drug offenders, are known to hang out,” Gen Chonasit said.

Anyone stopped by officers on patrol are likely to be subjected to a spot check made possible by two mobile ID card reading devices provided by the Phuket Provincial Office.

“The police will know instantly whether or not the people they are checking are wanted on outstanding arrest warrants,” said the general.

There are more than 3,000 arrest warrants still outstanding for crimes committed in Phuket, he explained.

“Most of them are for robberies, but some are for drug crimes and some are for more serious crimes,” he said.

“We also expect more machines to be provided to the police in the future,” he added.

Gen Chonasit rated cooperation with local people and business owners as the most important factor in making the project a success.

He explained that police manpower in Phuket was limited, with one policeman per 7,000 people on the island.

Police plan to regularly visit communities and discuss problems with local people to try to solve the problems specific to each community.

“I will make Phuket Police serve the people as best they can,” Gen Chonasit said.

THE EYES HAVE IT

A critical contribution to the security effort will be using the public as a collective resource to monitor footage captured by CCTV cameras installed throughout Patong.

“The CCTV monitoring room is still being set up, but we hope to have the system up and running by the end of this month,” Patong Police Superintendent Jirapat Phochanaphan told the Gazette.

Once the system is in operation, anyone will be able to log in and view live CCTV footage through their computers, iPads, tablets and even mobile phones.

“People will need to contact Patong Police Station first to set up a log-in account and password, but after that they will be able to monitor the CCTV footage via their phones from anywhere,” Gen Chonasit explained.

“We want people to help us prevent crime. It would help us a lot, with many people watching CCTV cameras instead of only two police officers watching the monitors.

“We will ask organizations – both private and government – to help fund the costs of installing CCTV cameras in appropriate places. Business operators such as hotels can help us by installing good-quality CCTV cameras in front of their hotels so we can monitor the roads,” he added.

Local Patong businessman Preechavude “Prab” Keesin, who is the son of Patong Mayor Pian Keesin and head of the largest taxi driver association in Patong, said he asked operators of entertainment venues along Phang Muang Sai Kor Road to install a total of 20 CCTV cameras to set up a network that will cost 400,000 baht in total.

By sharing the cost, the bar owners could afford to set up the system. “Some local business owners helped by donating a few thousand baht each, or paying for the installation, which helped reduce the cost for the bar owners,” he said.

Mr Prab explained that all 20 cameras had been installed two weeks earlier, with 12 already streaming live video and the other eight expected to be up and running within a week.

Gen Chonasit explained plainly that ensuring the personal safety of tourists was a top priority for the government.

“The government plans to boost the number of tourists coming to Thailand with the goal of earning 2 trillion baht in tourism in the year 2015 alone. Phuket made 111 billion baht last year, so Phuket is expected to earn 222bn baht in 2015.

“However, the most important part of this is local people cooperating to provide security to tourists who really need it during their travels,” he said.

“The Safety Zones will be in place until 2015. After then, we will follow up and evaluate how effective they have been.”

In closing the meeting, Gen Chonasit and Patong Police Superintendent Col Jiraphat each donated 100,000 baht to the project.