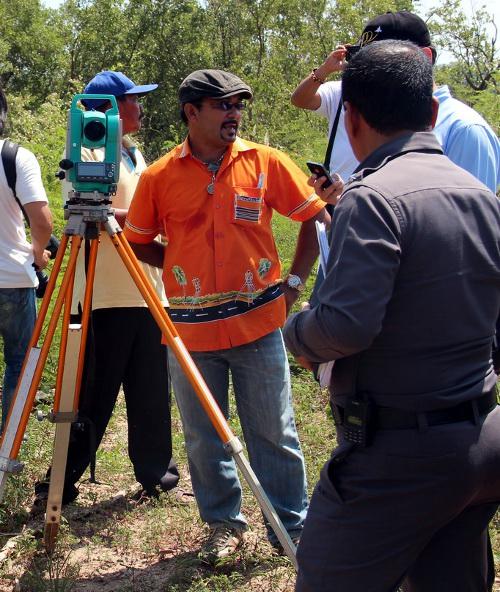 PHUKET: Plans by local residents to develop over 100 rai of land in Chalong, they claim is theirs, ground to a halt yesterday after more than 60 police officers arrived to support the alleged owner, who produced a title deed as proof of ownership.

The alleged owner, Prajit Hongyok, met fierce opposition from villagers as he rebuffed their claims that the property was an unowned “wasteland”.

More than 50 villagers gathered to prevent Phuket Land Office officers from surveying the site, a plot of more than 100 rai near the old Chao Fa mine in Soi Song Kun, in the Klong Mudong area (map here).

It took a total of 60 officers and the land title deed to calm the mob, who were concerned that their efforts in developing the property over the past several years, including the construction of 10 homes, would be dashed.

“The land is part of an old mine; it has been abandoned for decades. So we’ve claimed more than 100 rai of the land and built 10 houses on the property,” one villager told the Phuket Gazette.

“We have even worked on the access road – it used to be only a walkway that even cars couldn’t use,” he said.

“I just ask that the proper authorities step forward and prove that the land is legally owned,” he added.

Afraid that development had already gone too far and that perhaps waiting any longer would cause a bigger issue down the road, Mr Prajit requested that the Phuket Land Office survey the property.

“I requested the survey because I was told that the villagers were encroaching on my land, building houses and had even removed one of the markers used to establish the property’s boundary line,” Mr Prajit said.

“I’m having the plots re-surveyed to confirm which is my land and to make sure the villagers know that the land is owned,” he said.

“I’m not trying to pick on anyone. I just want to protect my ownership rights for land that I have legally owned for decades,” he added.

Mr Prajit also voiced concern over rumors of villagers having already divided the land into plots and verbally selling it.